Ahead of Odisha FC‘s season opener against Bengaluru FC, here’s a look at Aridai Cabrera through a statistical and tactical looking glass.

The Spaniard Aridai Cabrera Suárez’s arrival at Odisha FC marks the first time the winger has stepped outside Spain to play club football. The now 33-year-old has plenty of experience playing in the second and third tier of Spanish football which should benefit players like Jerry Mawihmingthanga who play in a similar position. A quick and technical dribbler, he often uses a drop of the shoulder to get past defenders and create chances. 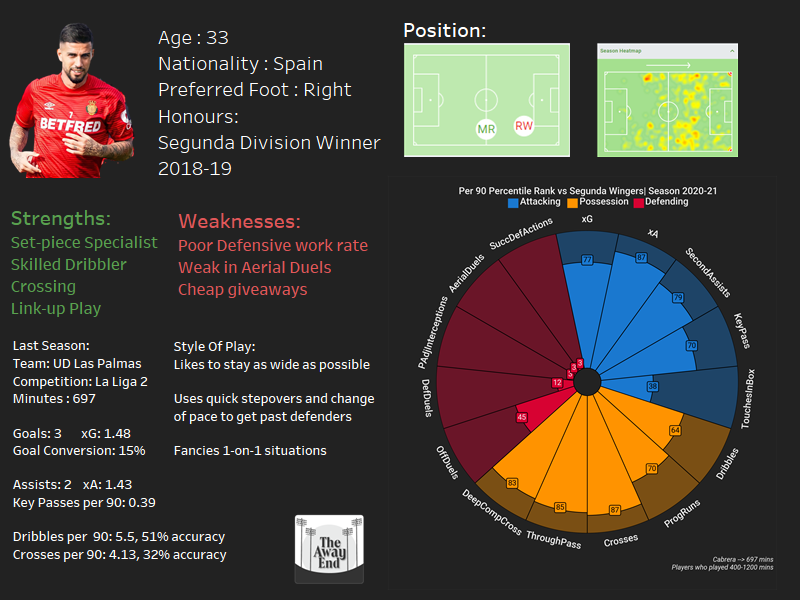 Cabrera is not a winger with a high work rate. Since he is past his physical peak, he uses his energy wisely in attack and not in defence. He does not help out the team by tracking opposition wing-backs. Instead, he positions himself closer to the forward line along with the striker.

Aridai does not make any unnecessary movements, but when he takes off, he is hardly ever stopped by the opposition mainly because his technique on the ball is above par.

The Odisha FC player often uses a few quick stepovers to get past opponents to put in crosses or combine with the midfielders/strikers. His goal vs UD Logroñés is a perfect example of this, cutting in with a neat step-over playing a one-two with the striker, and scoring the winning goal of the match. 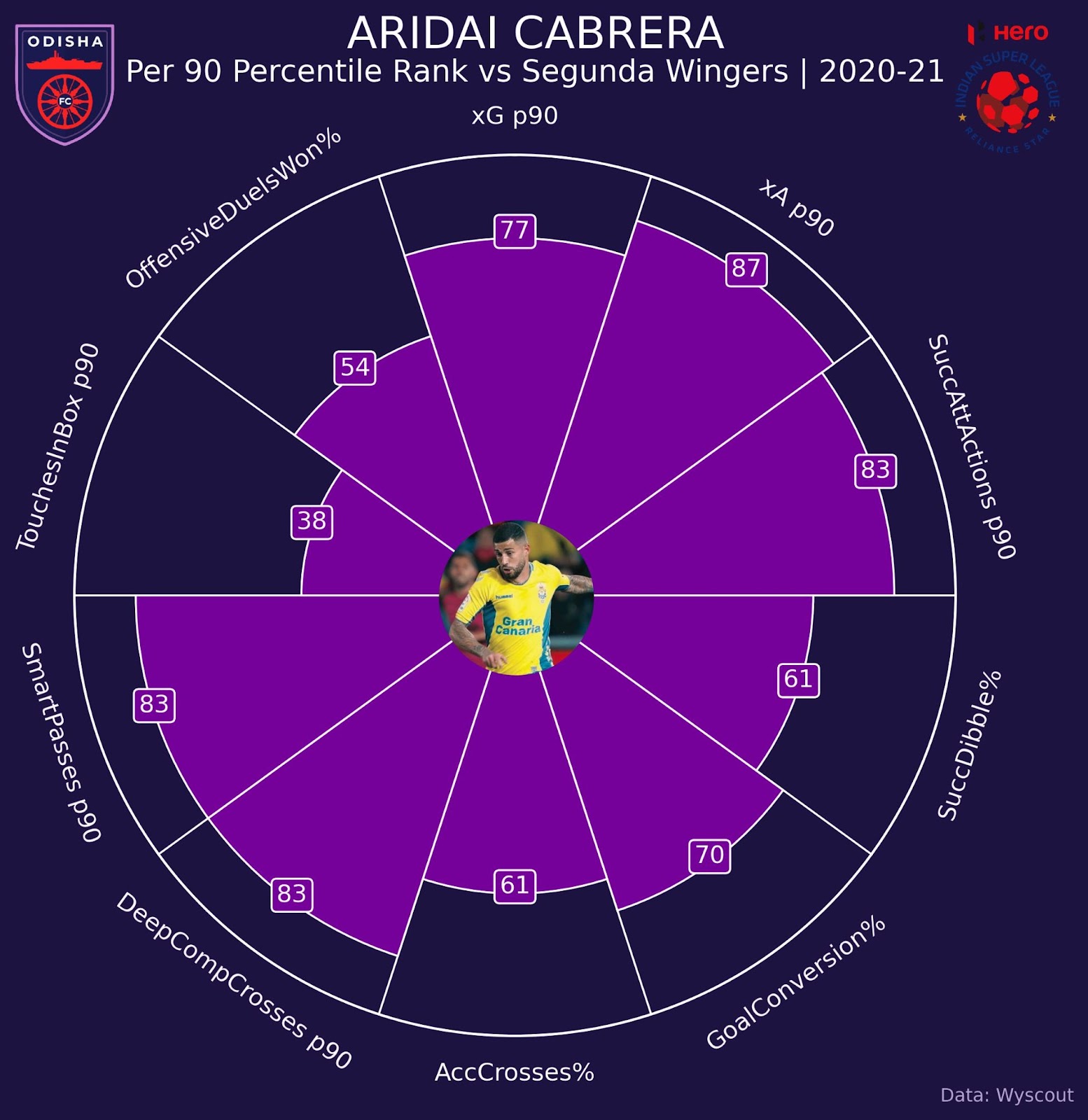 An average player would have xA per 90 in the 50th percentile, meaning that they are better than 50% of players in the data set.
For the sake of uniformity, I compared him with wingers and left/right midfielders who played 400 to 1200 mins because overall Aridai had played only 697 mins.

As seen in the graph, Cabrera has an 80 and above percentile rank in various creative attributes like deep completed crosses and smart passes, depicting his elite ability to create goal-scoring chances for his team.

Smart pass – A creative and penetrative pass that attempts to break the opposition’s defensive lines to gain a significant advantage in attack.
Deep completed crosses – A cross that is targeted to the zone within 20 meters of the opponent’s goal. 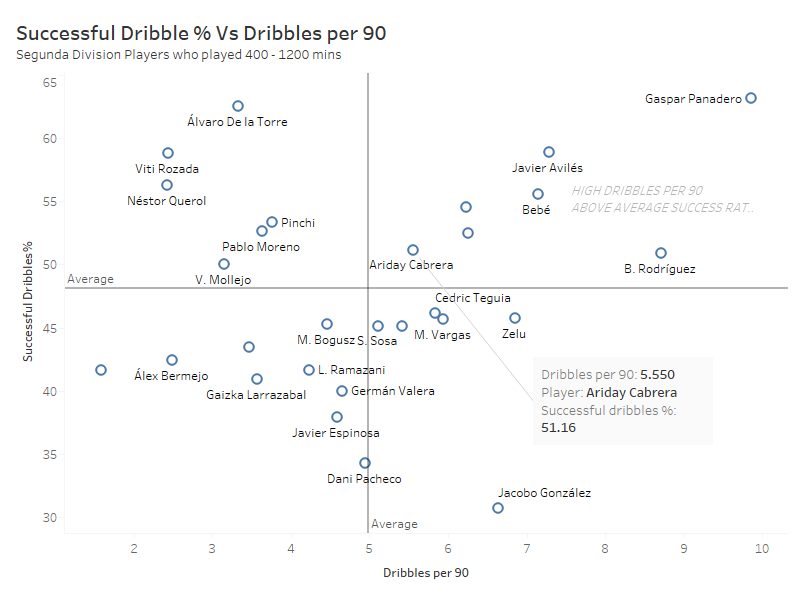 One of the strongest attributes of Cabrera is his dribbling. He performs 5.5 dribbles per 90 with a 51% success rate, which is above the average success rate of 47% when compared to other Segunda Division wingers.

If compared to the best dribblers in the ISL like Jorge Ortiz (2.78), Hugo Boumous (2.40), and Alberto Noguera (2.26), he has a higher volume of dribbles per 90 than any other player albeit with a lesser success rate.

As mentioned earlier, Cabrera is a very versatile player in terms of his playing position. He made 1.81 per 90 crosses from the left flank with 22% accuracy and 2.32 per 90 from the right flank with 39% accuracy. Although he has a higher accuracy with his right foot, he is not too over-reliant on it.

This is a very intimidating situation for opposition defenders as they have no idea which foot he is going to use to cross. In terms of scoring, all three goals from last season came from the right boot.

Cabrera’s previous team, Las Palmas, often played a 4-4-2 formation, where he slots in as a right/left midfielder. He was not burdened with defensive responsibilities – thus he always stayed as close to the byline as possible along with the centre-forward. With a possibility of counter-attack, it was expected that Cabrera and Las Palmas’ centre-forward combine and try to create goal-scoring opportunities.

Even though he essentially stayed out wide, he does not miss opportunities to either drop into the middle or cut in for a shot/cross. His quick feet and step-overs help him to do so.

Cabrera has a knack for creating space for his fullbacks. If the defence sticks too close to him, he often lures the opposition fullbacks to follow him and hence creates space behind the defense. The picture below illustrates the point. 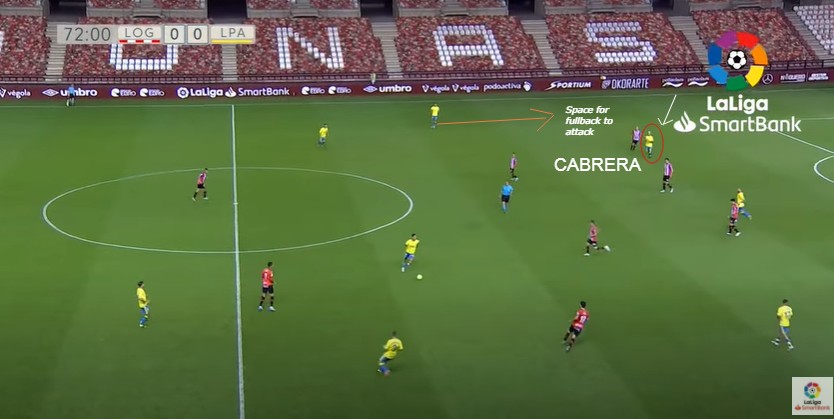 Another example of Cabrera’s brilliant ability to create space is displayed below. The ball is with the midfielder, Cabrera raises his hand and makes a fake run in behind the defender. The defender follows him and then Cabrera pulls back in order to create space for himself to receive the ball. Post this, the ball is played into Cabrera by the midfielder and Cabrera flicks it towards the right fullback Lemos, who is then fouled in the box. The penalty is converted by Aridai and Las Palmas wins the match 2-1. This kind of movement was how he created space often. Cabrera is also good at link-up and combinational play. Since he likes to drop into midfield, he often plays a quick one-two and helps relieve the pressure by creating a numerical superiority. Even though he is not much involved in the build-up phase, he has a higher contribution in progressing the ball from middle third to final third. He ranked at 87% for second assists and 90 for shot assists, showing his contribution in attack.

Since Cabrera is not among the tallest players around, he hasn’t managed a headed goal in his La Liga 2 career. Instead, when the ball is about to come into the box, he waits for the defenders to skew their clearance and then strikes the ball or tries to create a chance for a fellow teammate. 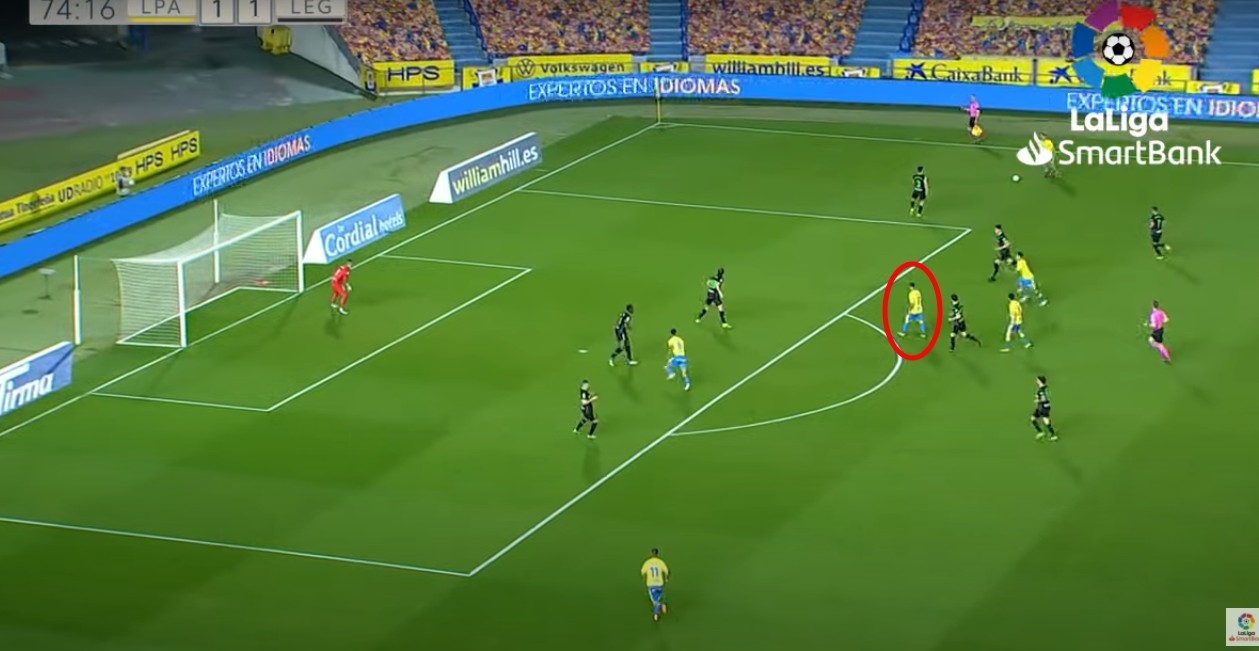 AS AN ODISHA FC PLAYER

If Odisha FC opts to play with two foreign centre-backs, Cabrera would most likely play as an attacking midfielder rather than a winger. Backed by defensive midfielders, Vinit and Paul, Cabrera would be in charge of creating goal-scoring chances. The previous season, he had more ‘key passes per 90’ than 70% of the other wingers and wide midfielders and a higher expected assists per 90 than 87% of the players.

He played approximately 5 progressive passes per 90 with 70% accuracy. The two assists he provided last season, one of them was a lob through ball from his own half and the other was a set-piece.

In summary, an ideal attacking mid is someone with good dribbling skills, ability to get past the first and second lines and should additionally be able to create chances for other teammates – Cabrera can very well take on this role in the absence of Javi and Krasniqi and a 4-3-3 formation can be used to implement this style of play.

On the flip side, if Odisha FC plays with one foreign centre-back, then Cabrera can play at his preferred wing position. If they play a flat 4-4-2, the attacking midfielder will have a lot more chances to score – be it Javi or Krasniqi. Cabrera at his previous team liked to stretch the opponents as wide as possible when the ball was on the opposite flank.

This allowed the midfielders to either exploit the half-spaces or have a shot at the goal. Mesa and Ruiz were the two central mids for Las Palmas last season, who benefited from this kind of situation, scoring 3(1) and 5(6) goals (assists) each respectively. At Odisha, we could see a staggered midfield shape, with Javi/Krasniqi staying higher up and the other midfielder Paul/Vinit staying behind to support the defence.

Cabrera mostly passes in a short to medium range with an average pass length of 19 metres. He completed 20.9 short/medium passes per 90 from which half of them are lateral passes (9.56 per 90), indicating the attacking midfielders receive a high number of passes from him. At Odisha, it could be Javi/Krasniqi who will be combining a lot more with Cabrera than any other player.

The other key player combinations this season will be Cabrera and Jonathas. The Brazilian center-forward Jonathas has a towering presence in the box and Cabrera on the other hand is a technical winger who can put in the perfect ball for CFs to head it in. Jonathas in his past two seasons has had a 48% success rate in aerial duels.

Since Jonathas and Cabrera both have the experience of playing in Spain, they should have a good connection which will be highly beneficial for Odisha FC.

Fun fact: They have played against each other a couple of times in LaLiga 2.

Cabrera has a decent success rate with through balls as well. 37% success rate for the last two teams he played for and attempted more through passes than 85% of the other wingers. So there are a couple of ways in which Jonathas can score, either through Cabrera’s crosses or a through ball in behind the defenders.

Odisha FC have shown their intent of challenging for a top 4 spot by bringing in quality players and coaches. They brought in David Villa as their head of Global Football Operations and then followed up with manager Kiko Ramirez. They have made four Spanish player signings showing a clear intention of creating a Spanish core.

Of course, just by signing players no club becomes strong – the players need to gel with each other and the manager should have his tactics sorted depending on the type of players he has.

All in all, Aridai Cabrera seems to be the best winger in the league in terms of quality and experience, but lacks defensive output. Most likely, Kiko will pair him up with a fullback and midfielder who can run the whole length of the field in order to compensate in defence.