If there is one thing that FC Goa displayed on Judgment Day, it would be game management. From coming back after trailing 2-0 against Mumbai to stifling Hyderabad into a draw – Ferrando shows time and again that his use and timing of substitutions is elite. The ability to turn the tides even after the 60th minute is only possible due to preparation.

Several times, in podcasts and interviews, Ferrando has mentioned how he has trained the team with 3 different systems – each coming into play depending on the situation.  We could see this from the start of the season wherein he experimented with various four-at-the-back formations, namely, the 4-1-3-2, 4-1-4-1, 4-3-3 and even the 4-4-2. Eventually though, he went back to the norm of 4-2-3-1, albeit with his own tweaks.

Staying true to his Catalan roots, Juan Ferrando promotes a very positive brand of football. His tenets include overloading, continuous rotations and a focus on player intelligence. Unlike pragmatic coaches who restrict their players to a certain role, the Goa boss prefers that his players understand the situations on the pitch themselves and improvise. A clear example of this is Saviour Gama. Even though he is a left back, he can be seen drifting into midfield or even attacking the box from the left. Such movements are compensated for by his team-mates who defend the spaces left by him. This in a nutshell is the ethos of the new FC Goa – an emphasis on zonal play with alluring player movements.

However, there is a reason why many clubs cannot adopt such tactics. The reason behind this lies in the versatility that the Goa squad possesses. One player who has consistently performed in multiple positions is Alberto Noguera.

The Spanish playmaker has been deployed in both offensive and defensive midfield positions and has been asked to fulfil multiple duties over the course of the season. He has taken this responsibility head-on and has been providing for the Gaurs in emphatic fashion. At the time of writing, he leads the assists charts with 8 assists to his name.

WHAT THE NUMBERS SAY

As the creative hub in midfield, he leads the Gaur midfielders with 2.95 attempted dribbles per 90. This is the 5th highest in the league among midfielders. His success rate is 76.90%, which is quite commendable. He is surpassed by 10 other midfielders out of which seven players occupy deeper positions than Noguera usually does. The high volume dribbling along with an above average success rate goes to show that he is very skilled at carrying the ball.

His passing is also a formidable part of his arsenal. As we can see here, he is fairly decent at long balls. Although, this aspect of his play is under-utilized since he operates higher up the pitch. The same is visible in his passing breakdown. Over 66% of his successful passes (31.24 out of 46.89 p90) are in the opposition half, out of which more than half are in the final 3rd (16.66).

As we can see in this image, Goa like to build-up using a 3-2 formation. In these scenarios, Edu Bedia joins the centre-backs and Noguera drops down to join the third midfielder (in this case, Glan Martins) in the double pivot. This gives the Gaurs enough options to rotate the ball, and get past phase 1 of building up. This is particularly advantageous because they are able to resist a high press and once Noguera gets the ball, he possesses the ability to turn and carry it immediately or release a winger. 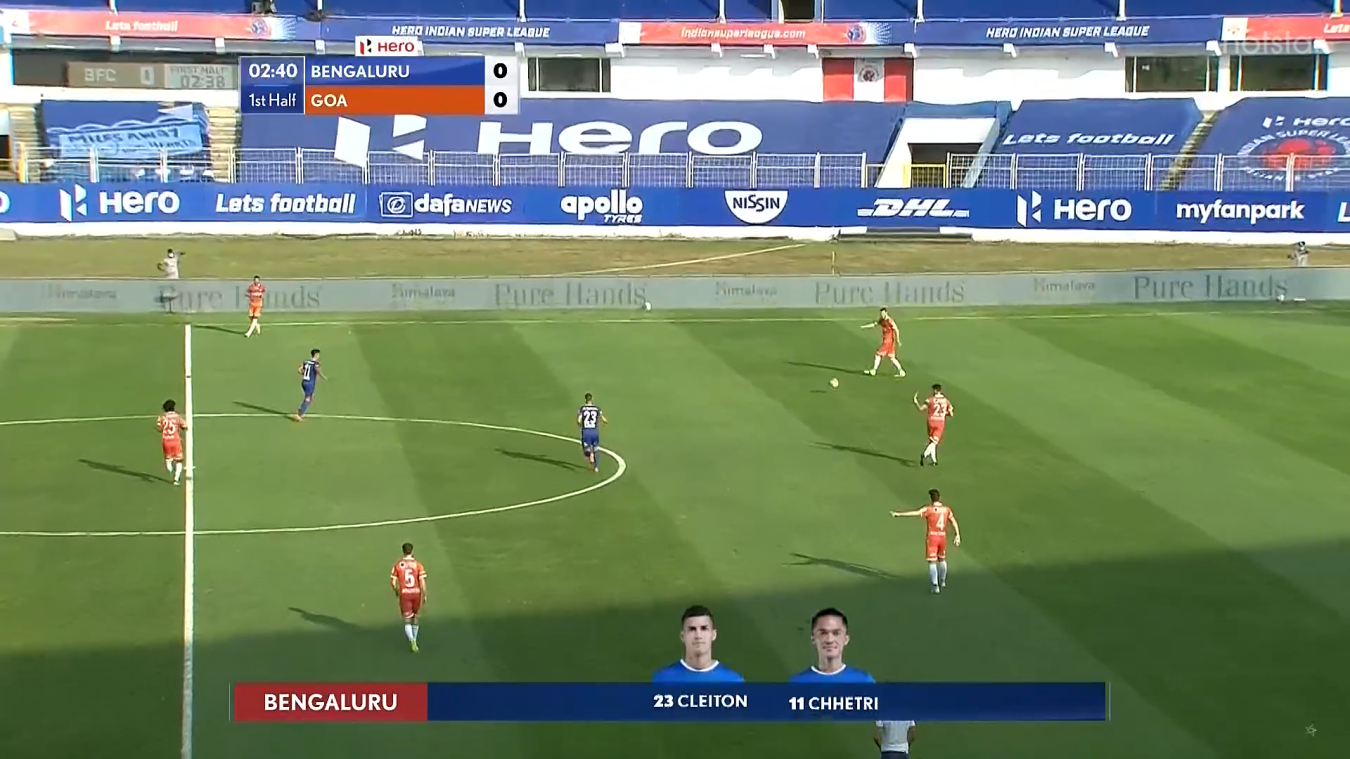 As spoken about earlier, Ferrando encourages his players to rotate to disorient defences. Here we see Noguera occupying the wing to facilitate Redeem drifting in. Even though he conventionally occupies the centre, he has the freedom to go wide or come deep if space permits. 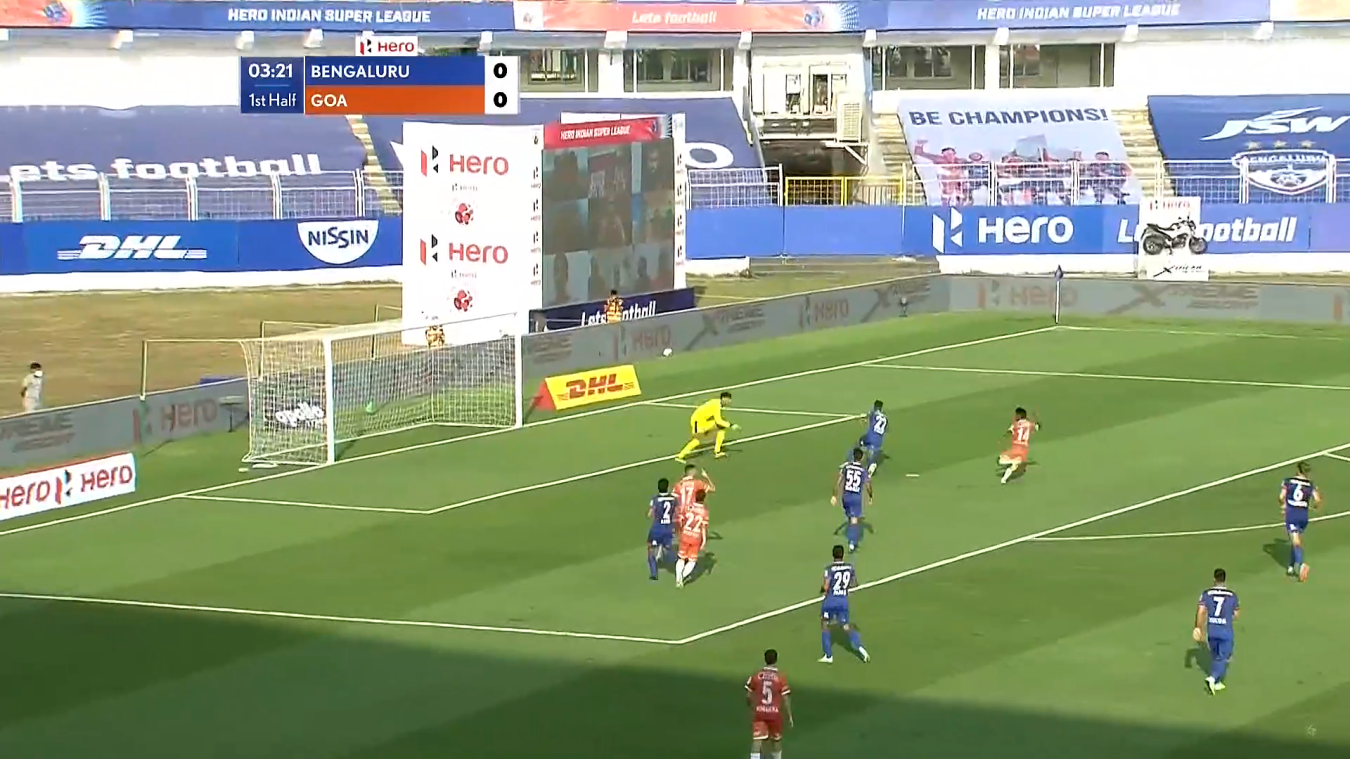 The following two photos show his positioning when Goa are defending. He forms a front two partnership with Angulo. He fulfils one of two duties – pressing the ball-carrier or marking out the nearest passing option. 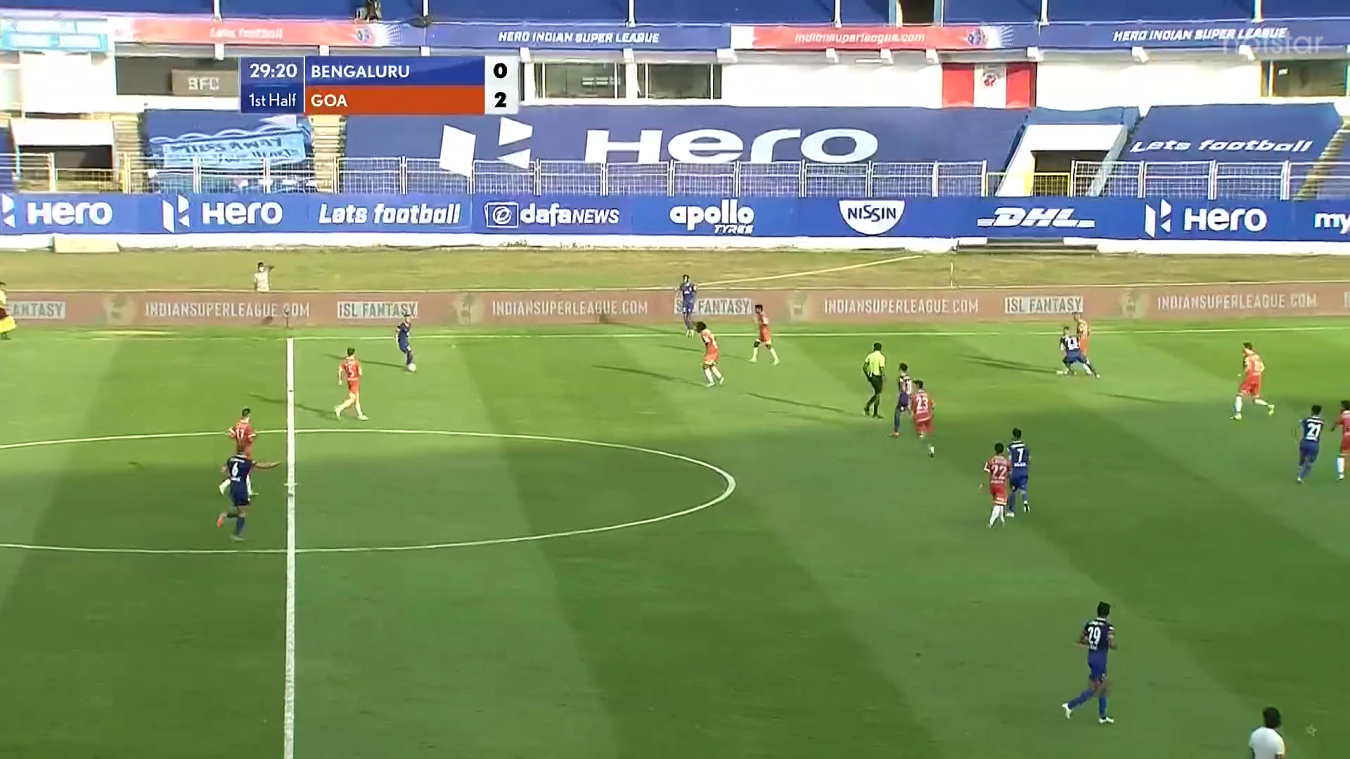 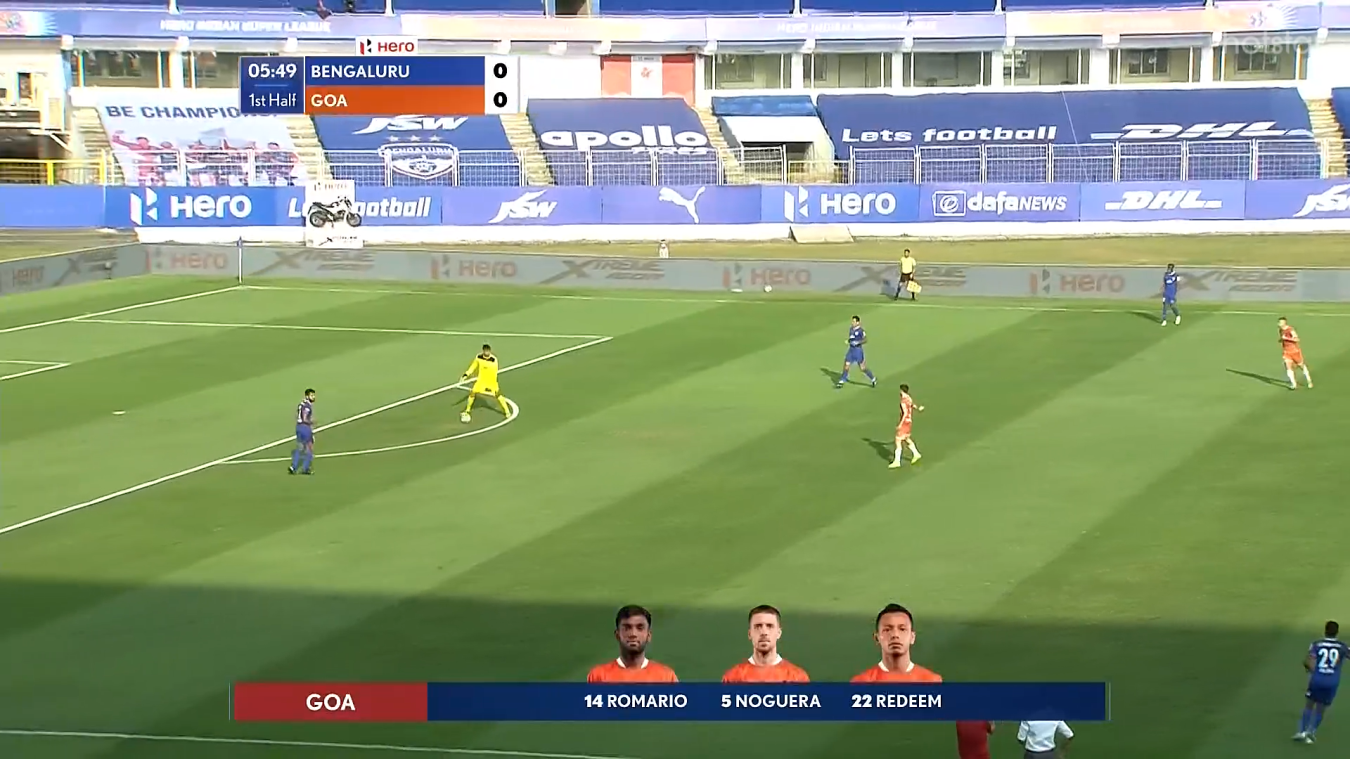 Being an attacking midfielder, his positioning and availability for receiving a pass is extremely crucial. By default, he prefers floating between the lines, if there are enough men for phase 1. By positioning himself this way, he makes it difficult for opponents to mark him out as they need to leave their zone.

His ability to foresee the game is immensely underrated. Very often, he opens himself up as a third-man option. Here, Edu Bedia has the ball and Noguera is surrounded by players. Instead of coming deeper and asking for the ball, he moves laterally. This way, when Donachie receives the ball (in pic 2), he can directly play it out to Noguera who will be free in space. This movement is industrious and hard to predict for defences as well because there he isn’t seen as a direct threat in the first instance. 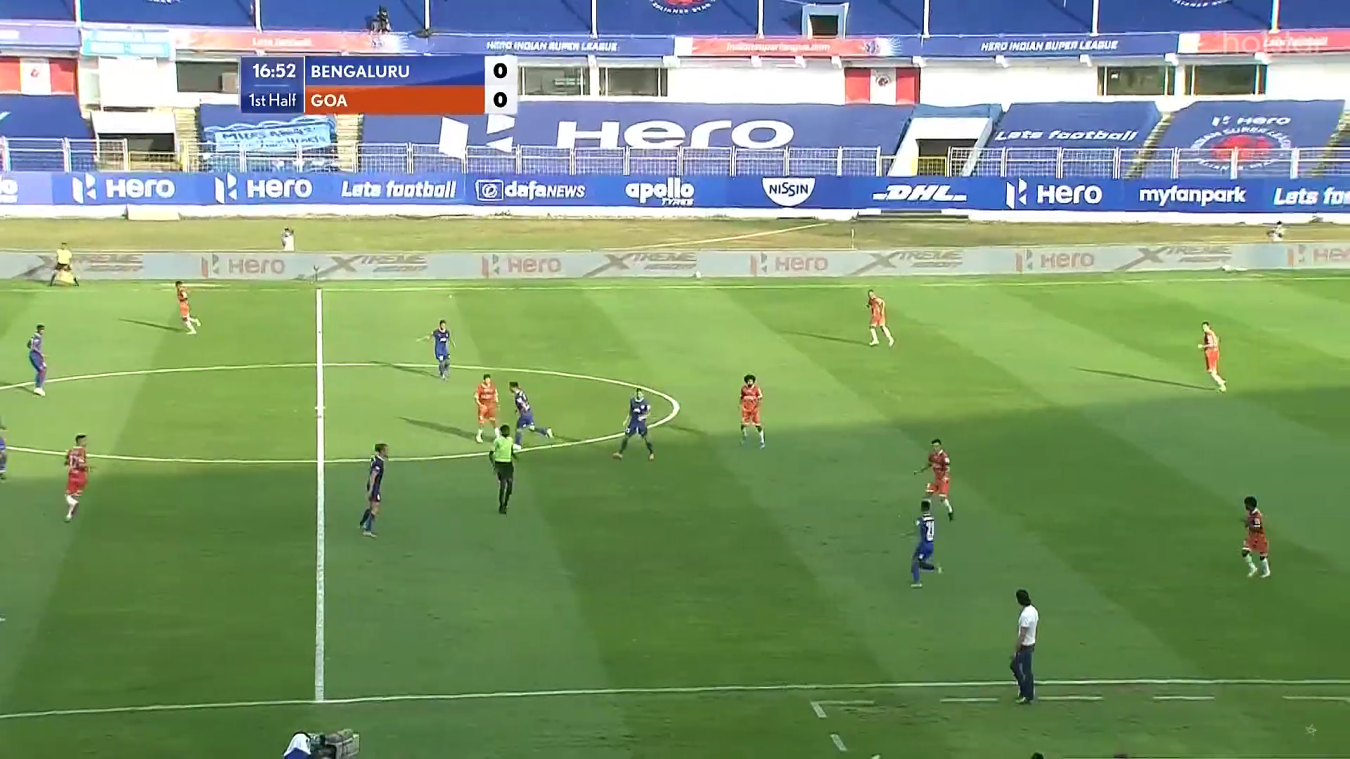 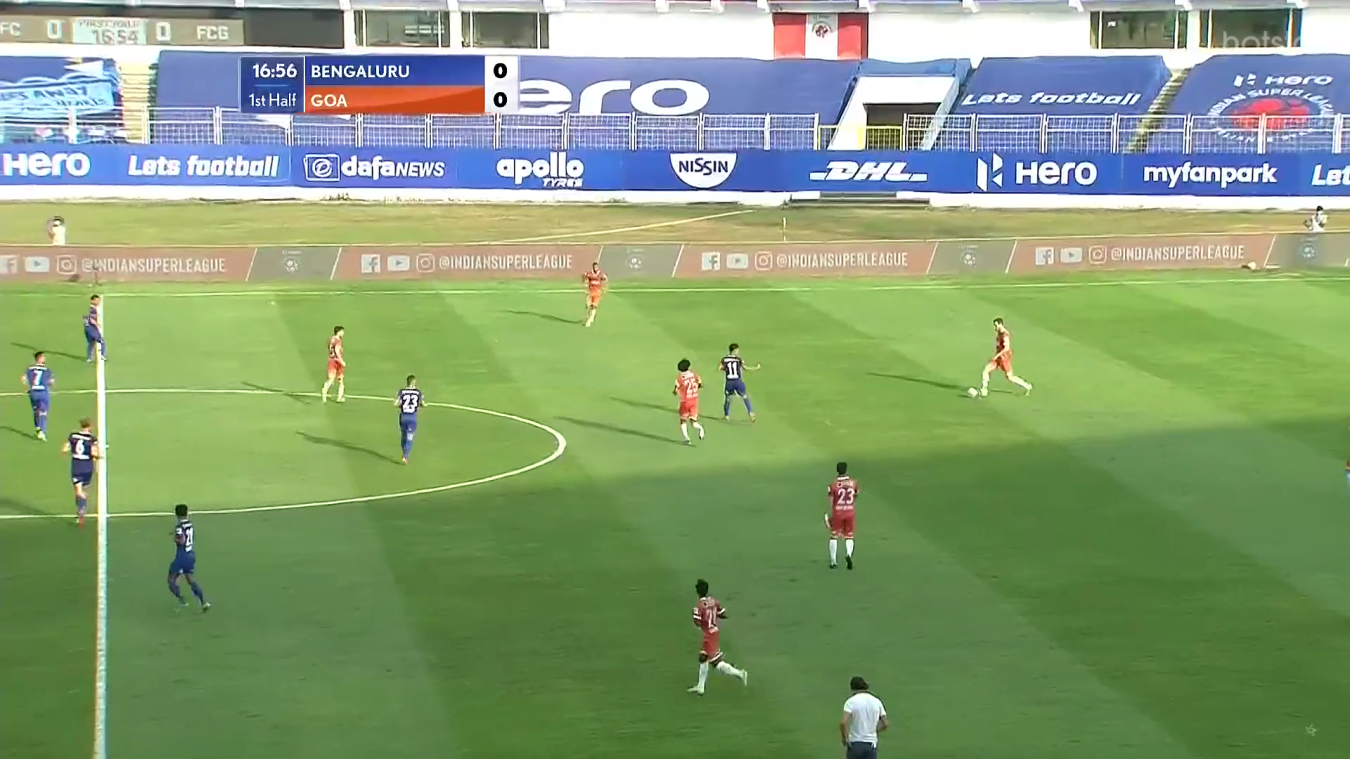 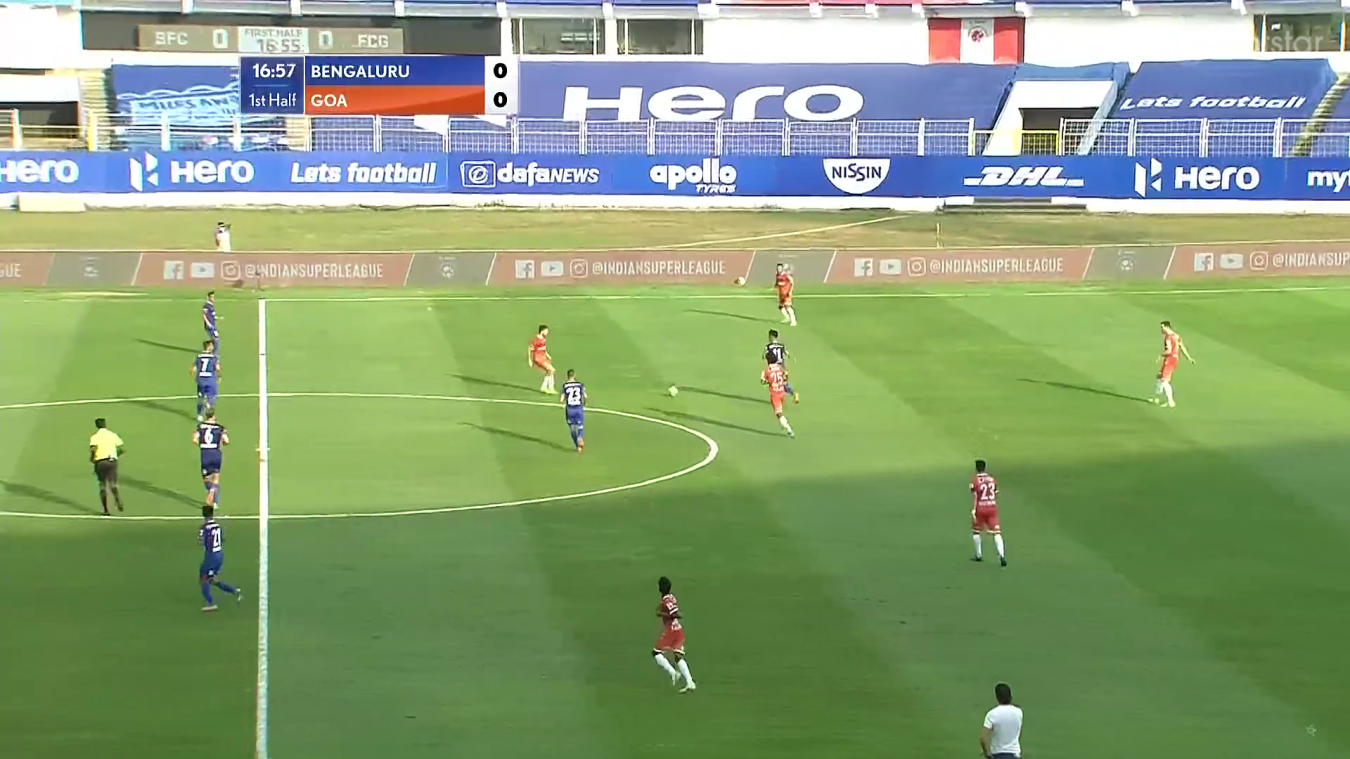 Being an attacking mid, Noguera isn’t the most defensively robust player and is usually bested in the air. However, because of Goa’s man-oriented zonal press, he receives some aid in the form of Glan Martins. Noguera then tries to latch on to loose balls and create play.

In conclusion, Alberto Noguera has been a pivotal player in Goa’s bid for play-offs. His consistency and technique will be sorely missed in their first leg of semi-finals against Mumbai City FC. With Brandon Fernandes out as well, Ferrando may turn to Jorge Ortiz for a no. 10 and deploy an Indian winger on the left. On the other hand, we might see Edu Bedia making a return to his old position in the hole.

As far as Mumbai City FC are concerned, Hugo Boumous is back after a lengthy ban and FC Goa might end up playing a game of containment like they did against Hyderabad FC. With Ivan Gonzalez also out tonight, it will be interesting to see what maze of possibilities and potential formations Goa cook up to keep the rampaging Mumbai City FC at bay tonight.