Kerala playing in a 4-4-2, Sandeep as a makeshift RB and Jeakson as a makeshift CB. Hakku and Prasanth were on the bench, but Kibu prefers this. Rahul KP as a striker next to Hooper

Devendra starting over Angulo this time. Starts at LW. Lenny out, Princeton in midfield

KBFC set themselves up in a basic 4-4-2 and played extremely direct. Goal-kicks, throw-ins, all would be taken with the intention to go forward. When launching the ball up, KBFC would shift to a 4-3-3 formation. KP Rahul would be in close distance with Hooper to break away and Sahal would be a little further, either to immediately press or to hold and create.

Facundo, whenever there was a turn-over, decided to dribble directly on the left flank. His intention was to take on Saviour and find space to deliver a cross after

With Sahal and Facundo drifting in more centrally, Kerala used their full-backs in attack to maintain the width.

This phenomenon complemented another rotation that was observed. At times, the formation shifted to a variant 4-4-2 diamond. During goal-kicks, or variant attacking scenarios, Sahal became an attacking mid, Facundo tucked in as an right sided CM next to Vicente and Juande became a holding mid. This clogged up the centre and gave enough space for Sandeep Singh and Denechendra to run into.

Hooper also dropped deep and let Sahal and Rahul KP go up front to use their pace.

Shape out of Possession

Kerala started off with their initial 4-4-2 block. However, the block was slightly staggered instead of a symmetrical 4-4-2. Juande occupied a more withdrawn position as compared to the rest of his line. This is known as vertical staggering and is done in order to plug gaps between the lines – something Goa use very well with their rotations.

Occasionally, Kone would break his final line and advance for the same reason. It could leave spaces behind him that Goa could exploit, but the motive was to not let the ball reach the final third.

Around the 15th to 17th minute, Kerala shifted Facundo Pereira into the final line of defense, thereby making the formation a 5-3-2. Vicente Gomez and Juande also changed their positions, i.e. Vicente became an RCM and Juande an LCM.

This could be done because Goa (Ortiz, specifically) was finding a lot of space when isolated with a full-back. By creating a backline of 5, they compressed space on the wings and had an extra body in the box to deal with crosses. 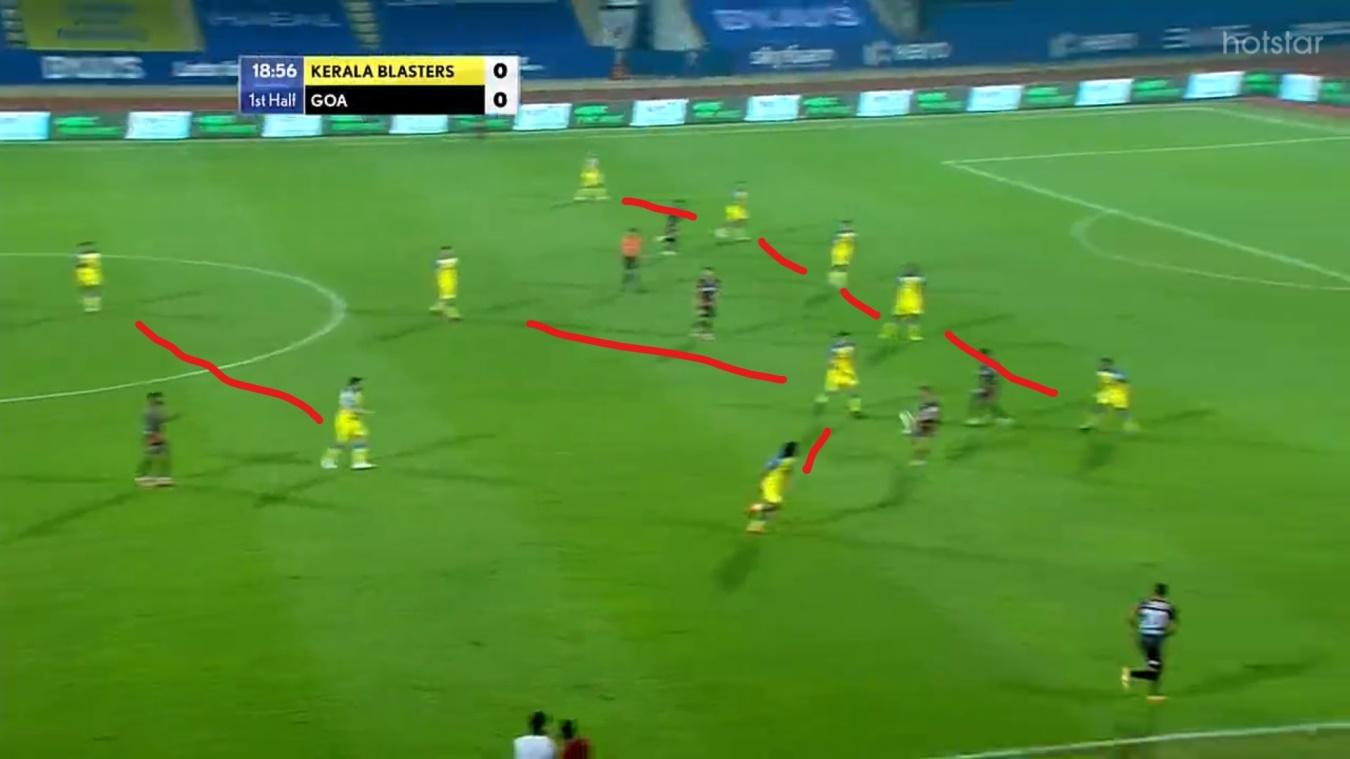 This carried on till Goa scored in the 25th minute, after which they resumed to their 4-4-2 shape.

Now that we have an idea about the basic defensive shape used by the Yellow Army, we can go into the player specific details set out by Kibu.

The attacking duo of Rahul KP and Gary Hooper tried to put pressure on the ball-carrier, but this bore little fruit. They also attempted to cover shadow the midfield options, but when put up against a 3v2, there is little two players can do against five.

This wasn’t Kerala’s main objective though. By setting out two lines of 4, they wished to compress space between the lines and have enough coverage on the wings. Sahal and Facundo both looked to press the full-back whenever they received the ball.

According to Sofascore, Goa had the lowest concentration of their attacking through the centre, and highest through the right. Kibu, having marshalled the centre with his strikers and centre-mids, opted to deputize the wings as well. He instructed the winger, centre mid and full-back to form a three-man containment on the wings. 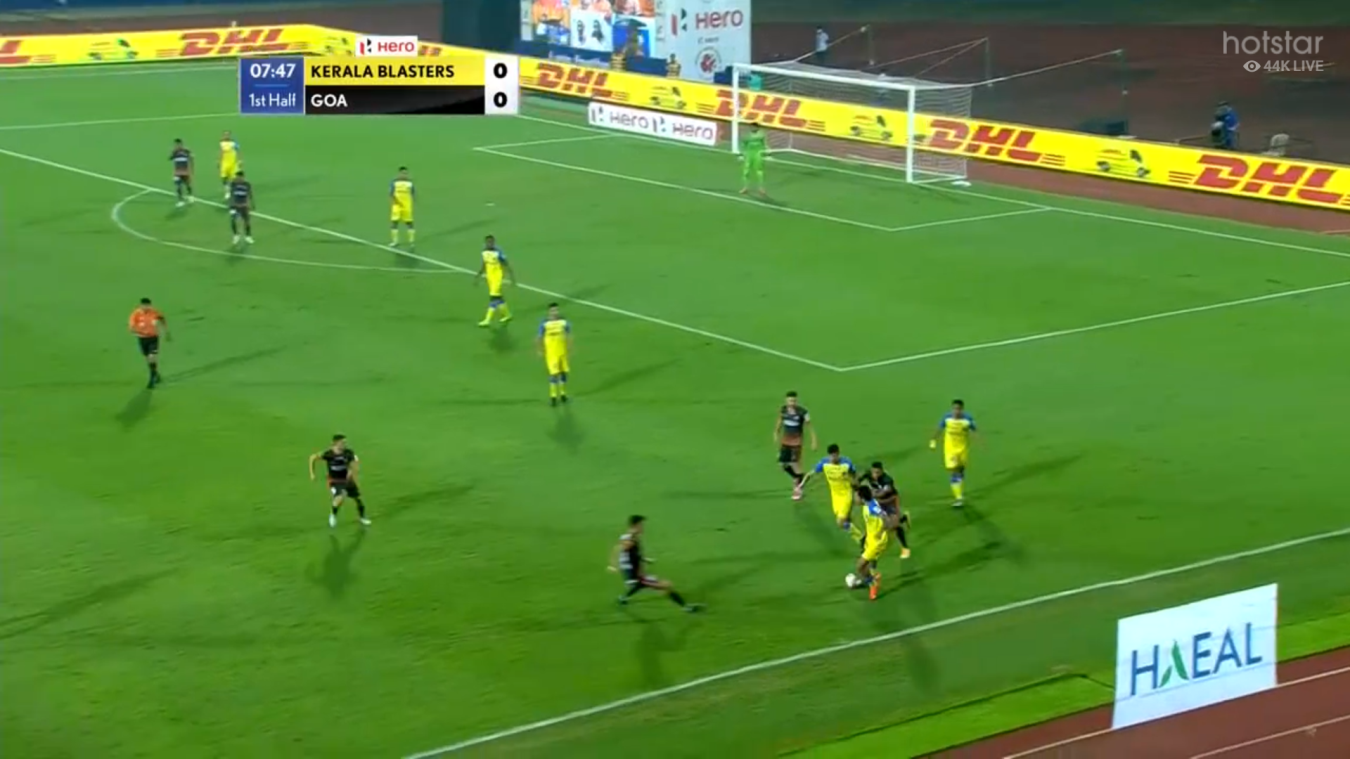 Here, we can see that the intent is to contain. All players are in their own half and behind the ball.

Due to the 5v2 overload up front, the Kerala forwards had a redundancy in their press. Even after being bypassed, they started staying up – maybe to aid in counters.

Soon after, Ivan Gonzalez was sent off and Kerala had larger incentive to press. They went ahead and tried to win the ball as high up as possible.

Seeing how Kerala’s solitary goal came from a set-piece, I found it appropriate to put a couple of routines under the microscope.

This is a free-kick that Kerala took from the left flank in the 34th minute. Although there was no goal, the movements were interesting enough to discuss

Here we can see quite a bit of crowding around the far post by FC Goa. Vicente Gomez is taken on by Romario, Jeakson and Juande are behind and Kone seems to have no marker

Here, Hooper is at the near post. Vicente is in the middle and there is a disadvantage for Kerala at the far post

Vicente signals for the ball to be played over him, and to see Kone’s run in behind

Unfortunately for Kerala, the delivery wasn’t that great and Kone couldn’t get the ball in the place he wanted

The second set piece we will look at is the goal scored by Rahul KP. 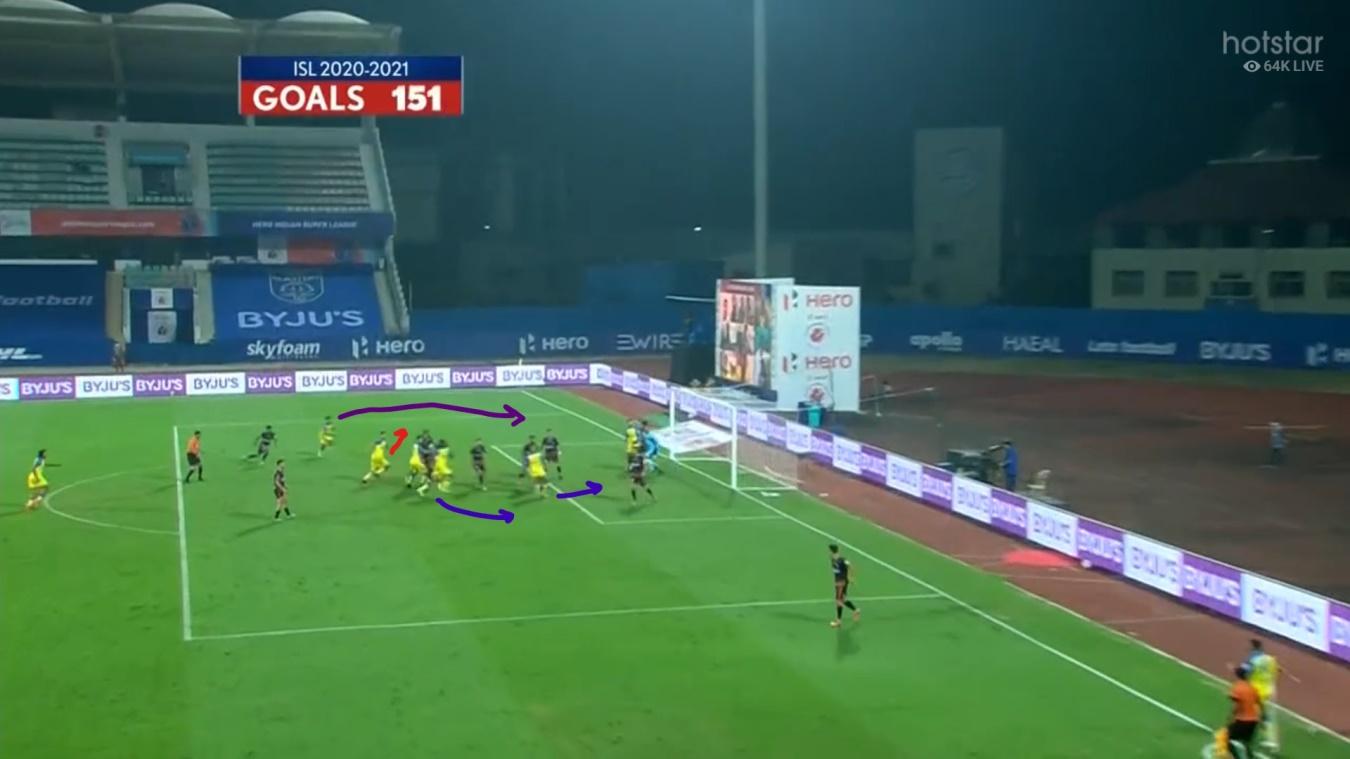 Blue arrows are the players making the run into the 6 yard box, red is Vicente Gomez who attacked the far post and purple is the one who came from deep and scored.

The ones in blue were able to distract the opposition from going behind, and Vicente Gomez blocked Saviours run as shown. A fine delivery and a timely header finally turned out to be the set-piece goal Kerala were looking for all night. 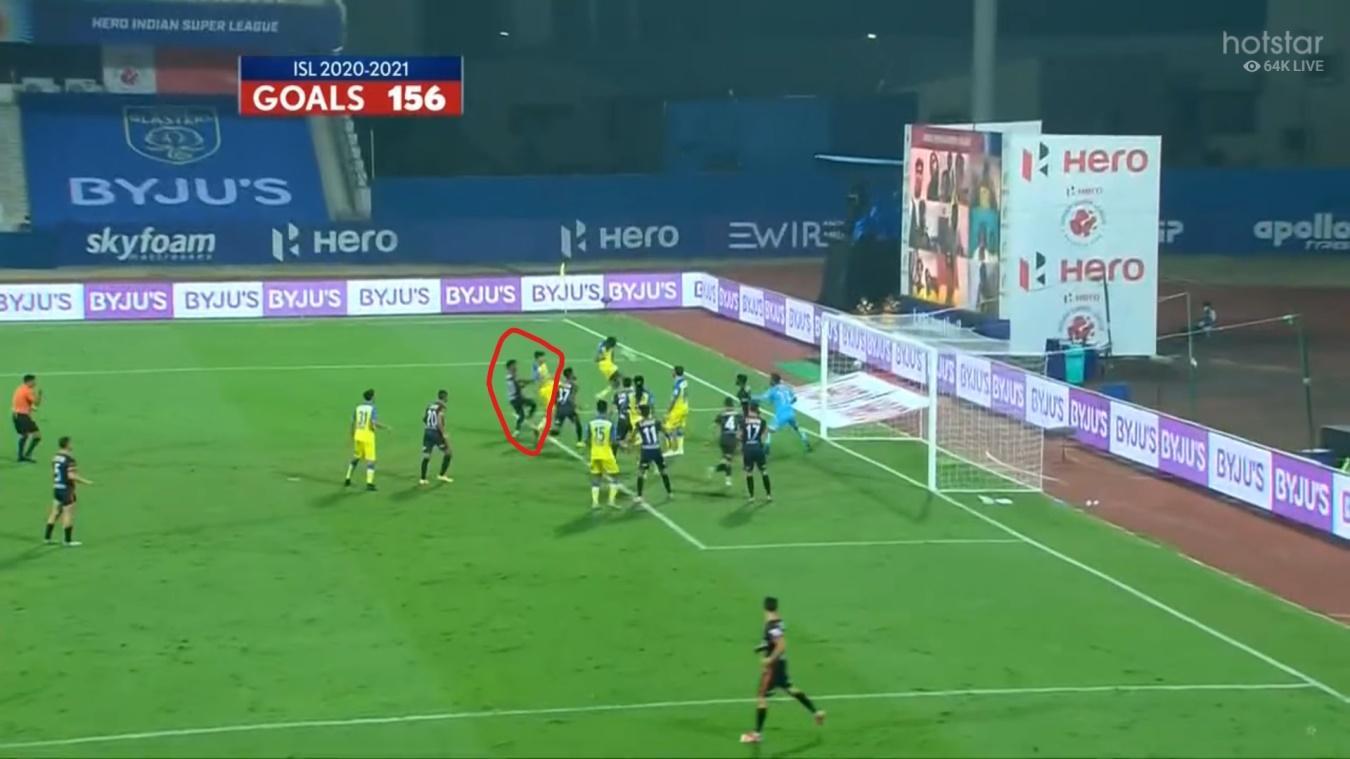 Goa built it out from the back mainly using short passes and overloads. Phase 1 showed us that they used a 3-2 orientation in defence. Edu Bedia slotted in between or alongside the two centre-backs. Princeton and Noguera would come a little deeper and form a double pivot right in front of the defence. This allowed Goa to progress the ball very smoothly from the back.

One of the tenets of their build-up play is that there must be an overload in every phase so that there are enough options. Even when the ball is in or around the final 3rd, Princeton and Noguera moved up to provide support or made runs occupying space. Edu also came higher up to provide a safe backward passing option.

This way, they could keep possession and still have players available in every phase of the game

In the second half, Devendra was subbed off for Igor Angulo. This saw Ortiz go back to the left wing and Angulo spearheading the attack in a more static fashion.

As opposed to earlier, there was little occupation of areas between the lines. Even though the first line of the Blasters was bypassed, we usually saw the ball being played out wide with Ortiz cutting in.

There was little time to analyze their play in the second half, as Ivan Gonzalez was sent off. This saw Goa take off Romario and bring in Aiban to maintain the numbers in defense. The slight gap in the right wing position was compensated by Angulo occupying the right half-space, and the duo of Ortiz and Noguera running their socks off to link up play.

Jorge Ortiz was given a free role in creating play. He often went on to the right wing, with Romario coming in as an attacking mid. Occasionally, this happened with Devendra as well, wherein Ortiz would go to the left and Devendra would be the striker.

Here, Ortiz (#9) is on the right, and Romario is in the centre and spearheading the attack.

Here we can see quite a bit of movement. Ortiz has come deep and is next to Sahal, Seriton is higher up and maintaining the width. Princeton is making a run into the right-wing position and Romario has occupied the central-attack zone. Meanwhile, Devendra has come from the left and is leading the line.

The crux of Ferrando’s system is to have a player in each zone. If someone changes their position, another player must take it upon themselves to fill the gaps.

Rotations in the second half:

After Angulo came on, some more familiar patterns were visible. Due to Ortiz shifting to the left hand side, we could see his usual cut in to the left and Saviour overlap. 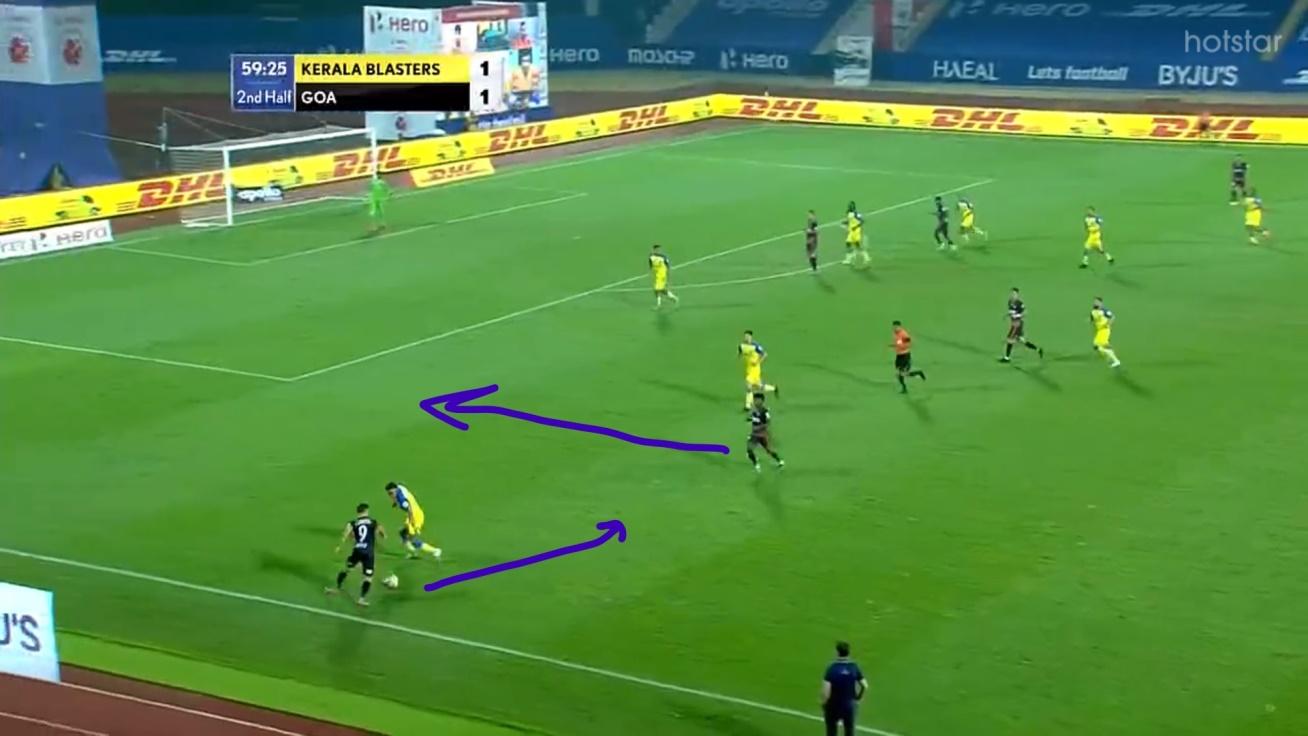 As said earlier, soon after Ivan’s sending off the attack became disjointed. Pre-planned and structured rotations were few and far apart. Ortiz tended to come deep and carry the ball, however it was a futile task against Kerala’s resolute defense.

Shape out of Possession

The on-paper formation for FC Goa was a 4-2-3-1, however the players were not always at the same position where they started.

Mohd Ali has stepped out of the back 4 to contest for the ball, the rest of the formation is a 4-2-3-1

As mentioned earlier, the focus is on zonal occupancy rather than individual positioning.

This is because Angulo was unable to press as much as Devendra, and he was left up front for finishing. The more mobile players tracked back and formed a 4-1-4 block.

FC Goa deployed a high press. Whenever Kerala got the ball, the player closest to the opponent ball-carrier applied pressure. Since there was a quick trigger to the press, the 4-2-3-1 formation was often broken and players changed their position with respect to the opposition.

Here, there Kerala defender has the ball. Ortiz covers his nearest passing lane and presses instantly. Noguera sees his only option and draws himself closer

Once Noguera is close to his man, he covers his angle to play it back to the defender (out of frame) and restricts him to face the touchline. 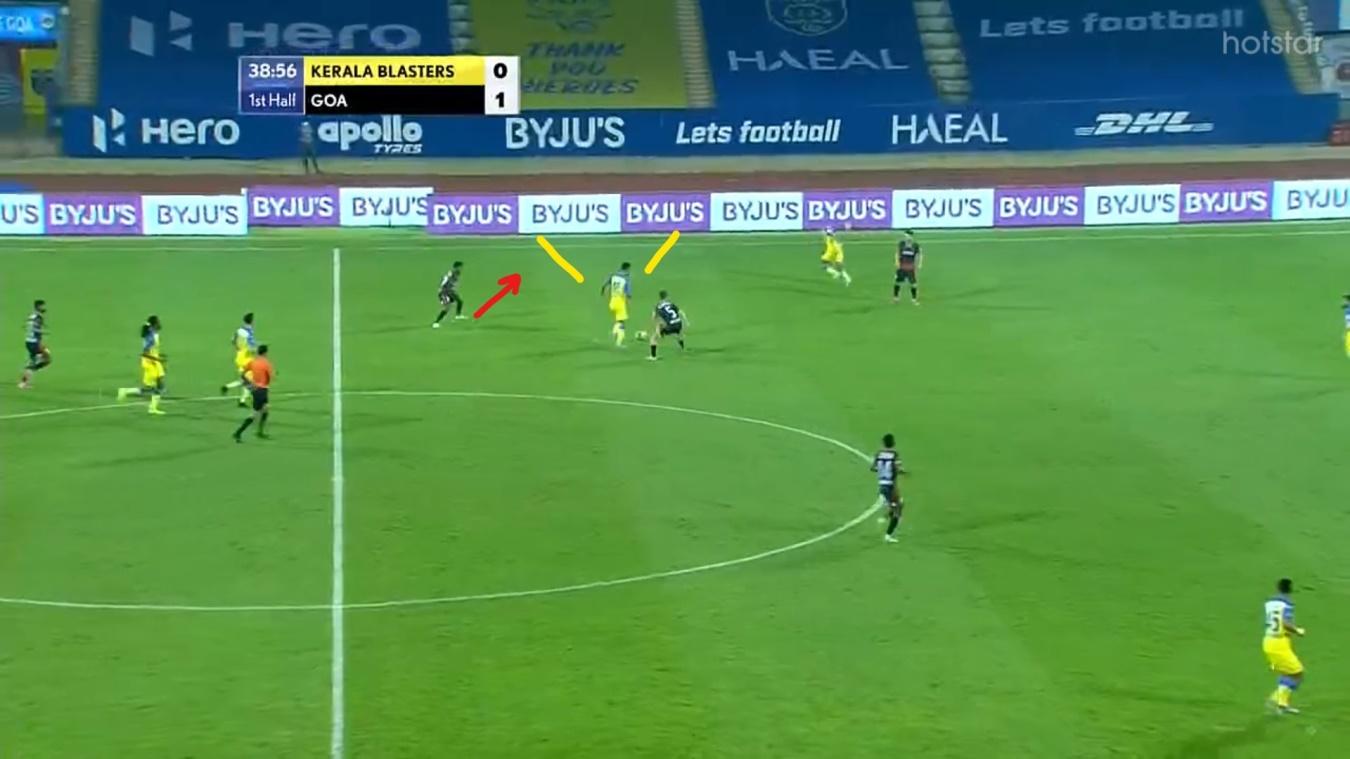 Devendra holds his ground as he is blocking the forward passing lane, but is aware of the passing option to his left.

Once the ball is played, he immediately closes down the man in yellow, and puts Kerala in a tight spot.

This is known as man-oriented zonal pressing wherein players are responsible for a particular space and press the opponent occupying said space. It is a high intensity, demanding pressing system that needs cohesion and time to develop. It is effective because it gives the ball-carrier little time to think.

However, the downsides are that it requires high amounts of mental and physical energy. Also, it leaves space behind the pressing player. If the first few defensive actions are bypassed or countered, the opponent can find themselves in a favorable situation. Seeing how Goa also like to commit men forward, Kerala were able to get into counter-attacking situations where they were in a lot of space. To cope with this, Ferrando had a ‘no-engagement’ policy in place.

When there is a dangerous situation in defense, the last line of defense does not commit to the press. Meanwhile, the rest of the team tracks back to make up the numbers. 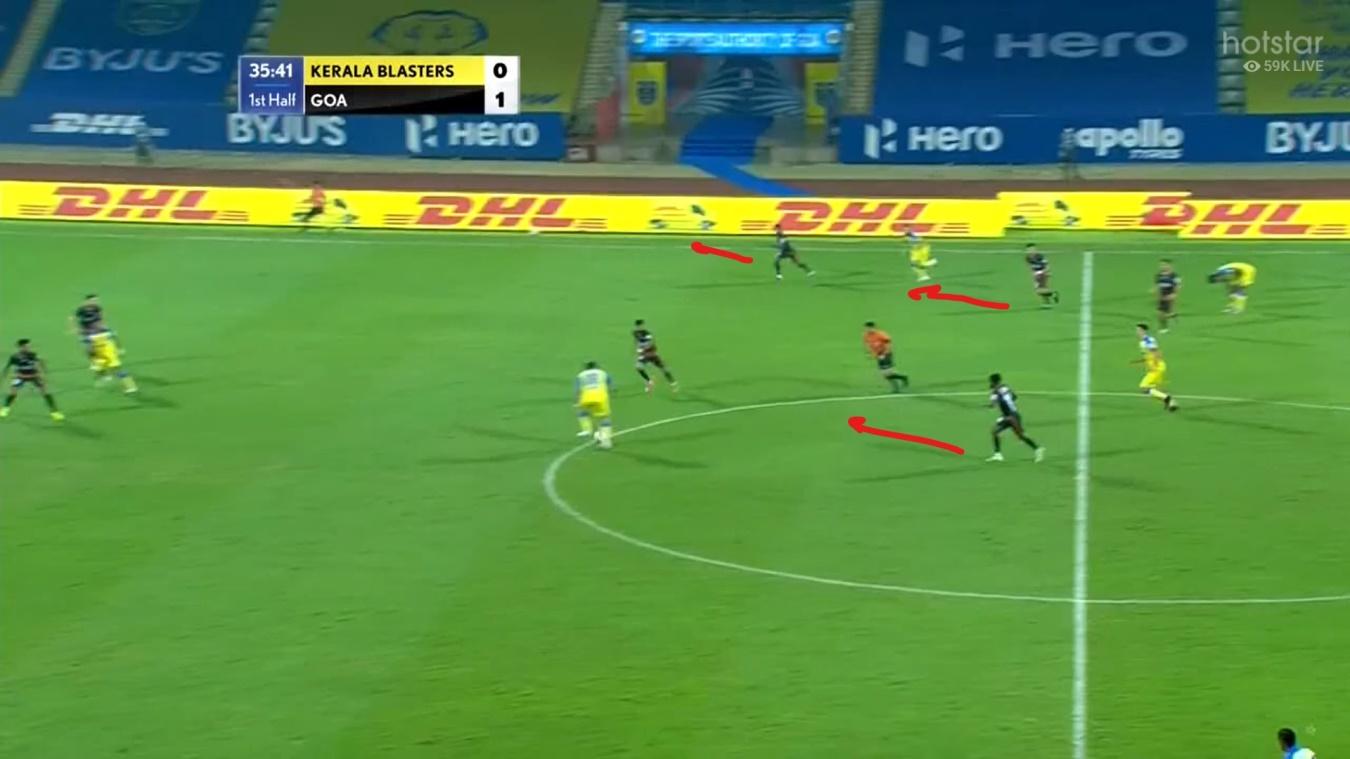