Out of all the poetic and stylistic parallels that can be drawn between the two sides, the one that would best describe this match would be experience versus youth.

Even the build-up to the match would suggest the same – Des Buckingham, the youngest coach in the league against Antonio Habas, the oldest and most decorated coach; Pritam Kotal playing his centenary game in the ISL against Vikram Partap Singh who is making his way into the starting XI for the first time.

Trophy or no trophy, the stage was all set for a mid-week blockbuster and boy, did the scoreline deliver. Without further ado, let us take a look at how both teams set up and how things led up to 5-1. 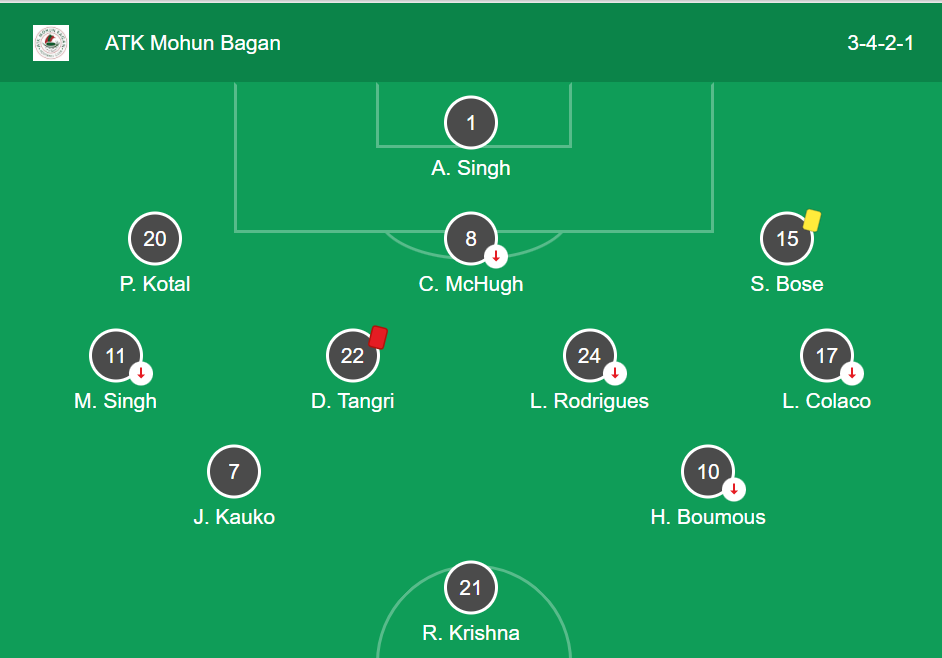 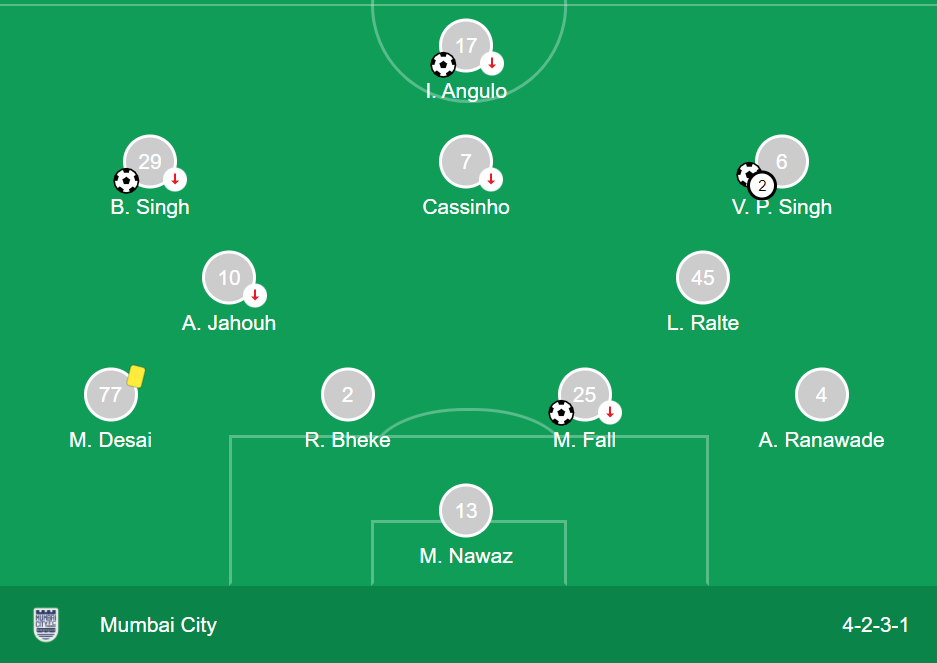 The reason behind starting Vikram over Raynier must’ve been related to availability of space. Considering that the Mariners set up with three centre-backs and Liston as the left wing-back, there would be good opportunities to find space on the right wing and be 1v1 against Subhasish.

Mumbai truly love their width when they are on the ball. From the back-line, the centre-backs go close to the touch line and ask the full-backs to push up. Jahouh is either a pivot right in front of the CBs or joins their line to form a back three. 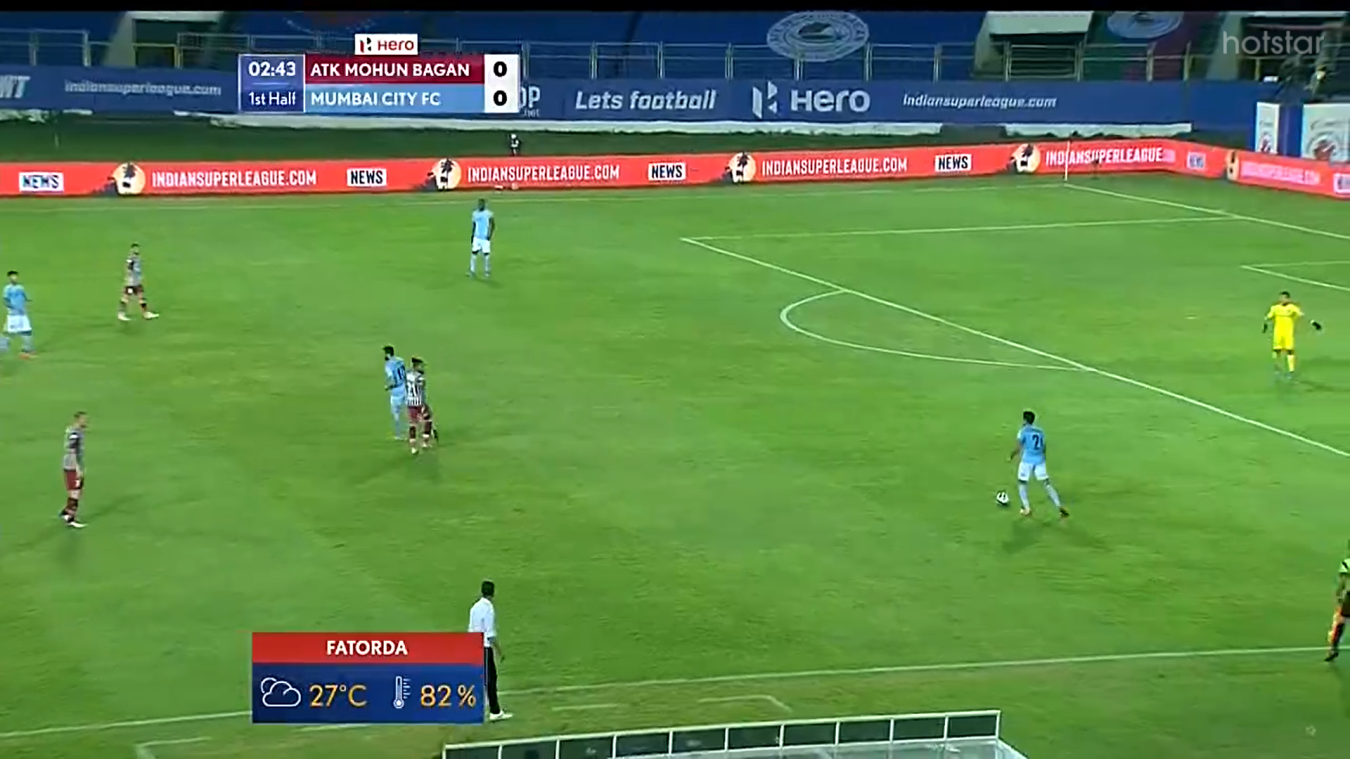 From this point, depending on ATKMB’s pressing pattern and availability of passing options, Mumbai either used wide overloads to progress or played direct balls into Vikram Pratap and Cassio.

Let us look at the wide overloads first. 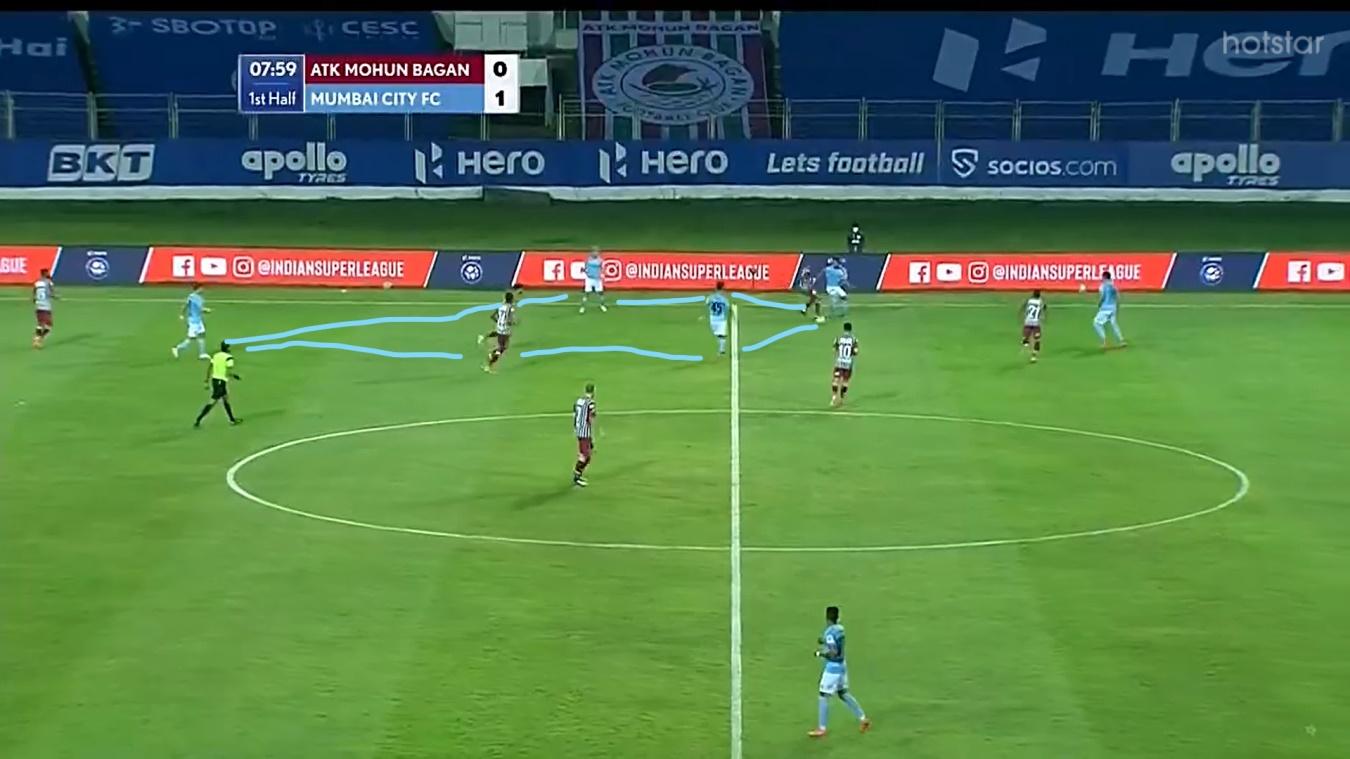 As we can see above, there is a box of sorts that is formed. This pattern was seen over and over again in order to facilitate progression from the wings. At the right-most vertice, there is the right-back (Amey Ranawade) and the right winger (Vikram) is directly in front of the right-back. Apuia, the left-sided CDM comes wide to help and Cassio too drops slightly and comes in at the far edge of the vertice.

If we take a look at the heatmaps of both Apuia and Cassio, we can see a significant amount of involvement in the half-space and near the touch line. 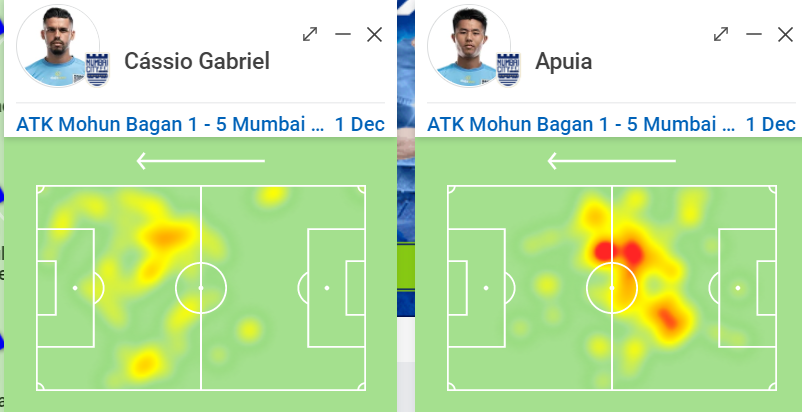 Forming this box gave the Islanders a huge advantage on the wing. If Liston was to close down the full-back, the ball would be played to Vikram (either through Apuia or directly) and he would be isolated with Subhasish.

If Liston marked Vikram, it would give Amey the freedom to bomb up the flank. Cassio’s positioning was also very helpful in this. Although he was a tough option for Amey to directly play to, he was at a very favourable angle and distance from Vikram and Apuia. With a couple touches, they could easily find him.

The tactical nous along with all of the aforementioned players’ ability to shield the ball made this an effective tactic.

Even off the ball, this situation was beneficial for Mumbai. In case they lost the ball in that area, ATKMB would have limited directions to move into (as they are right next to the touchline). The ball can easily be diverted to a throw-in and at worst, possession will be conceded in a non-threatening area.

The strategy on the left was a lot more direct. Since most of the ATKMB players were pulled out to the right wing for defending, the left wing was gaping for Bipin to exploit. We could see this in both of Vikram’s goals and in Bipin’s goal.

Though Mandar and Bipin also used Jahouh to progress down the wing, a structure as discussed earlier wasn’t quite observed. However, we did see Mandar heavily overlapping, almost becoming the left winger at times. 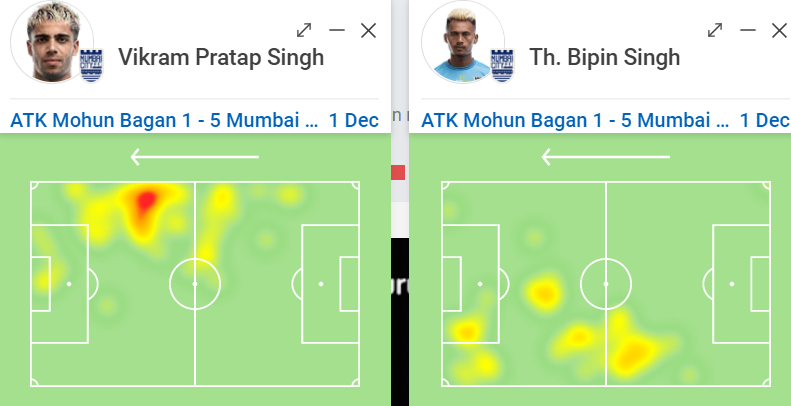 The difference in either players’ heat-map shows the difference in roles – Bipin getting the ball from a lot of turn-overs, or finding space high and in the half-space. Meanwhile Vikram is closer to the touch-line and near the midfield.

In case the aforementioned ‘box’ on the right couldn’t be formed, the players opted to go direct. Whether it be a long soaring ball into the opposition half or an adventurous pass between midfield lines. In this case, Cassio and Vikram were the targets as they have the ability to take their markers on in a 1v1. If both of these players weren’t able to turn, the ball was played back, and the build-up process resumed again.

Unlike Mumbai, ATKMB saw little of the ball (42.3% possession). However, they too had their methods of progression, aside from just going long. 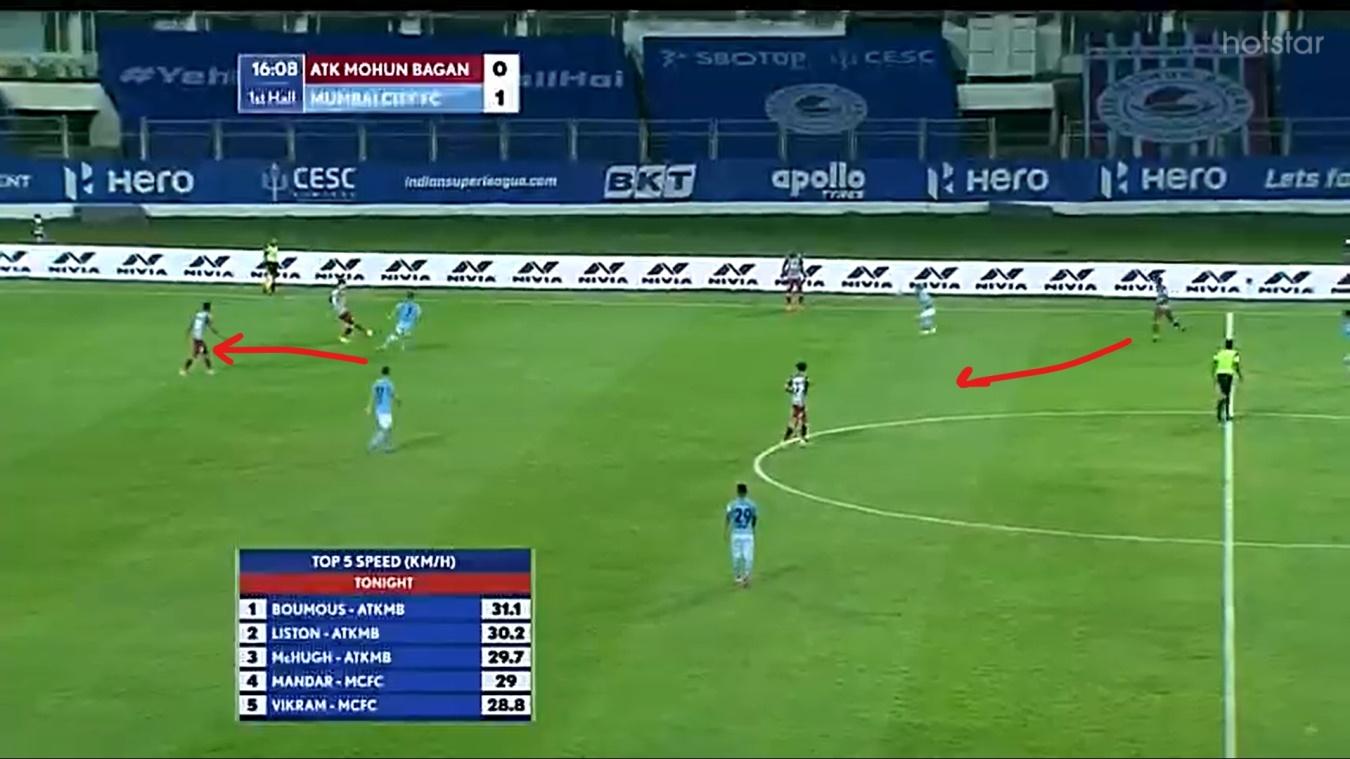 Out of the back three, Subhasish generally went wide, with Pritam and McHugh becoming the two centre-backs. They didn’t split as wide as Mumbai did but they had a fair bit of distance between them.

Lenny dropped into the back-line, either to draw a marker and create space for McHugh or to come in as an extra option since Mumbai pressed with two men ahead.

Since Subhasish held the width, Liston could come inside and exploit the space vacated by Lenny. Hugo too, was seen coming in deep next to Deepak Tangri in the pivot.

Manvir held the width on the right, and Kauko operated in the right half-space. The same can be seen below. 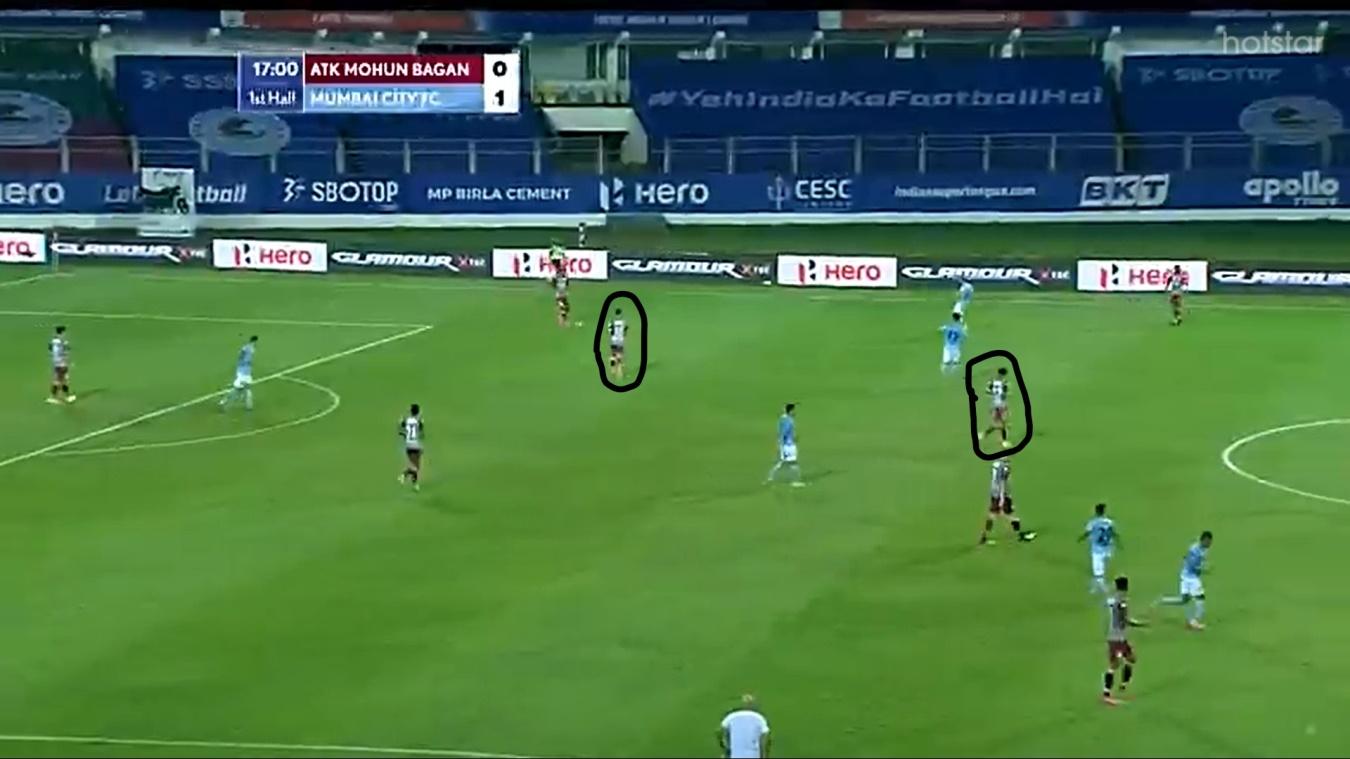 The encircled players however, are Tangri and Boumous. Since Boumous was given the freedom to roam and he had to drop deep to receive the ball, it was Tangri who often took his place higher up the pitch. 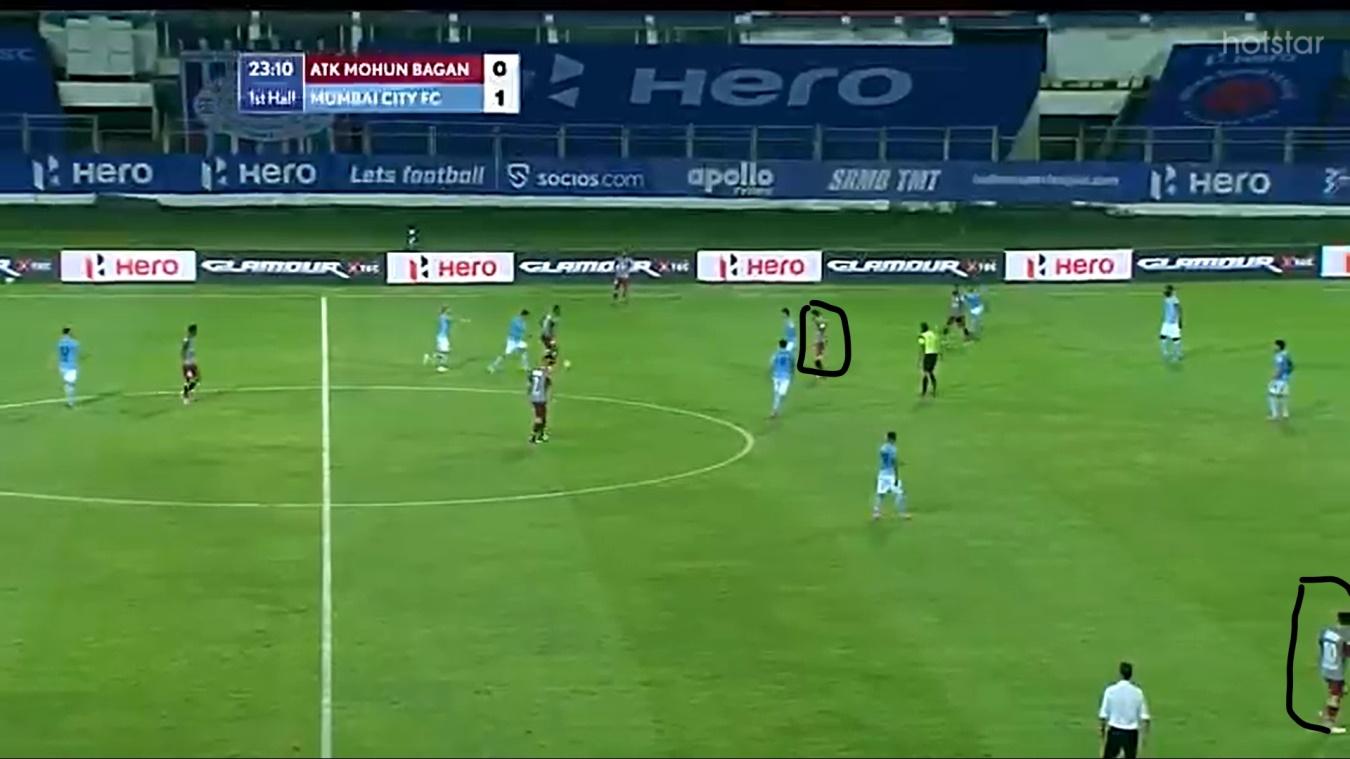 Unfortunately, since ATKMB went down to 10 men in the second half, it was difficult to find any discernible patterns in build-up as they were relentlessly pressed and most of their attempts were to get the ball out of danger.

Mumbai set up in a classic 4-4-2 while pressing. Cassio was the one to initiate, as he closed down the ball-carrier. Igor Angulo tended to cut out passing lanes, mostly those of the accompanying CB. 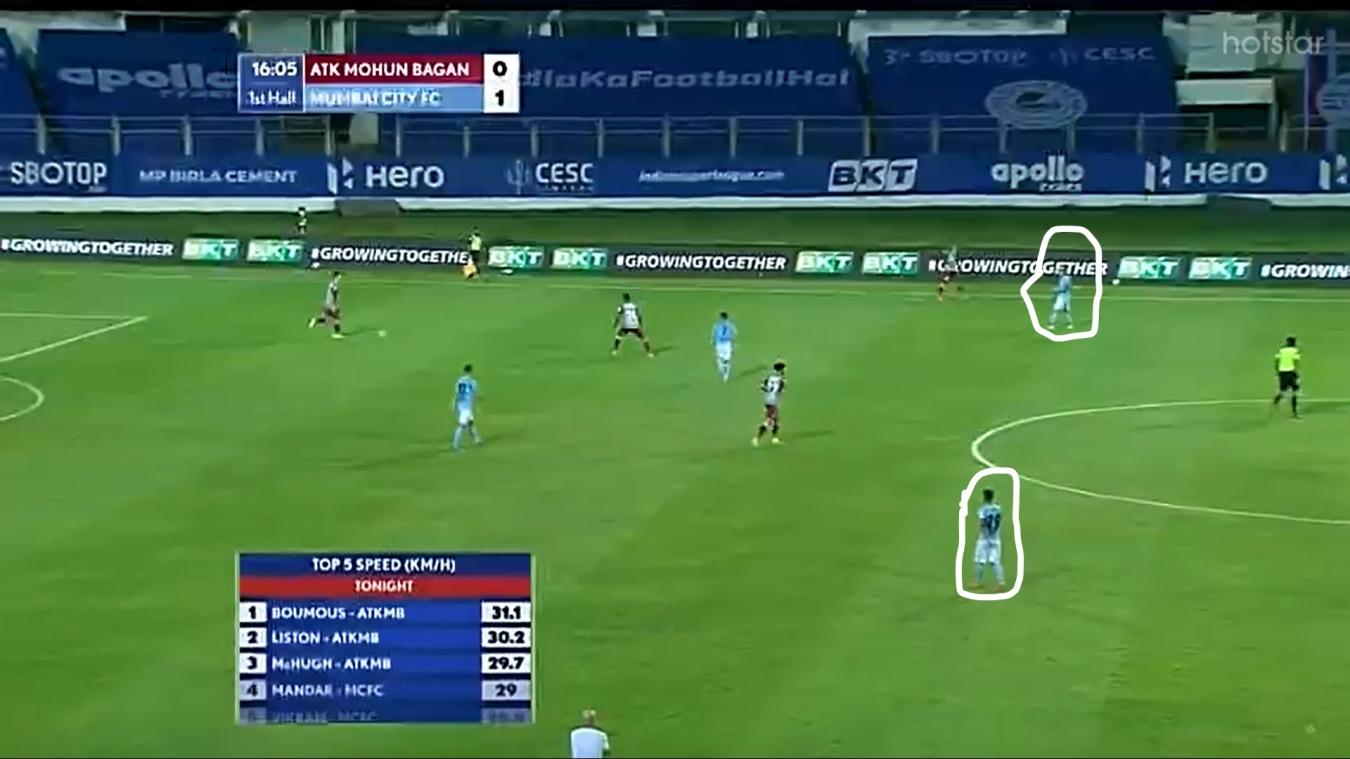 Here, we can also see the wingers fairly advanced – something the Islanders tend to do when the ball is in the opposition half. They primarily went head to head with Subhasish and Kotal, but also tracked back deep into their own half if the ball crossed the half-way line. 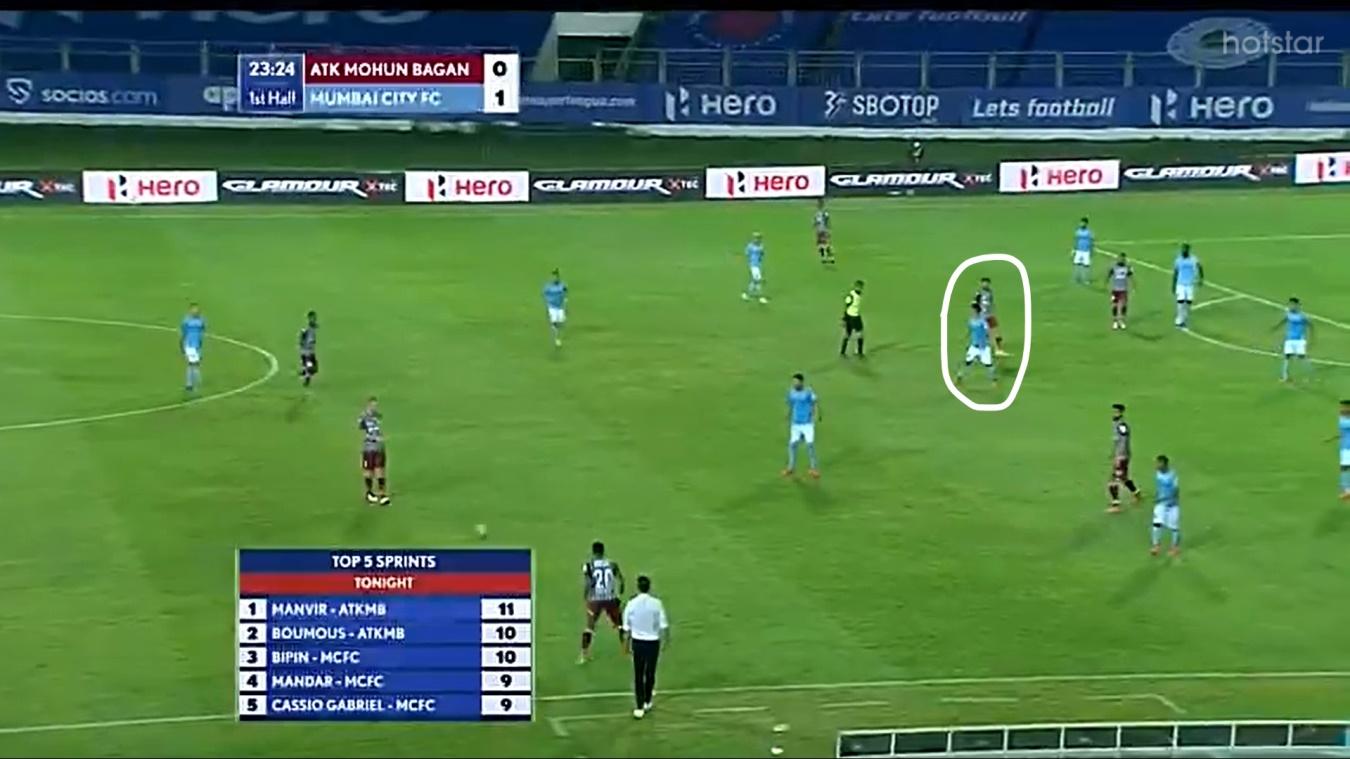 We can see two more things in this photo – one is the zonal marking implemented in midfield, and second is vertical staggering.

Throughout the game, we could see Apuia pressing players that entered his side of the pitch i.e. left midfield, be it Boumous or Tangri. Meanwhile Jahouh, would look at the right. We can also see staggering here. This means that the players of the same line (Jahouh and Apuia of the midfield line), are placed diagonally with respect to each other. This is done to prevent gaps between the lines. Jahouh’s high positioning prevents Kauko or Kotal to play an easy pass into the forward line, and Apuia’s positioning ensures security between the lines.

As opposed to their build-up, Mumbai had a much narrow defending pattern which is indicative of how little space they gave Kauko and Boumous.

Habas set his side up in a 3-4-2-1. In the beginning, they gave the centre-backs a bit too much space, and were slightly hesitant to press high. This could be due to their fears of being stretched out vertically. However, as the game went on, we could see this pattern. 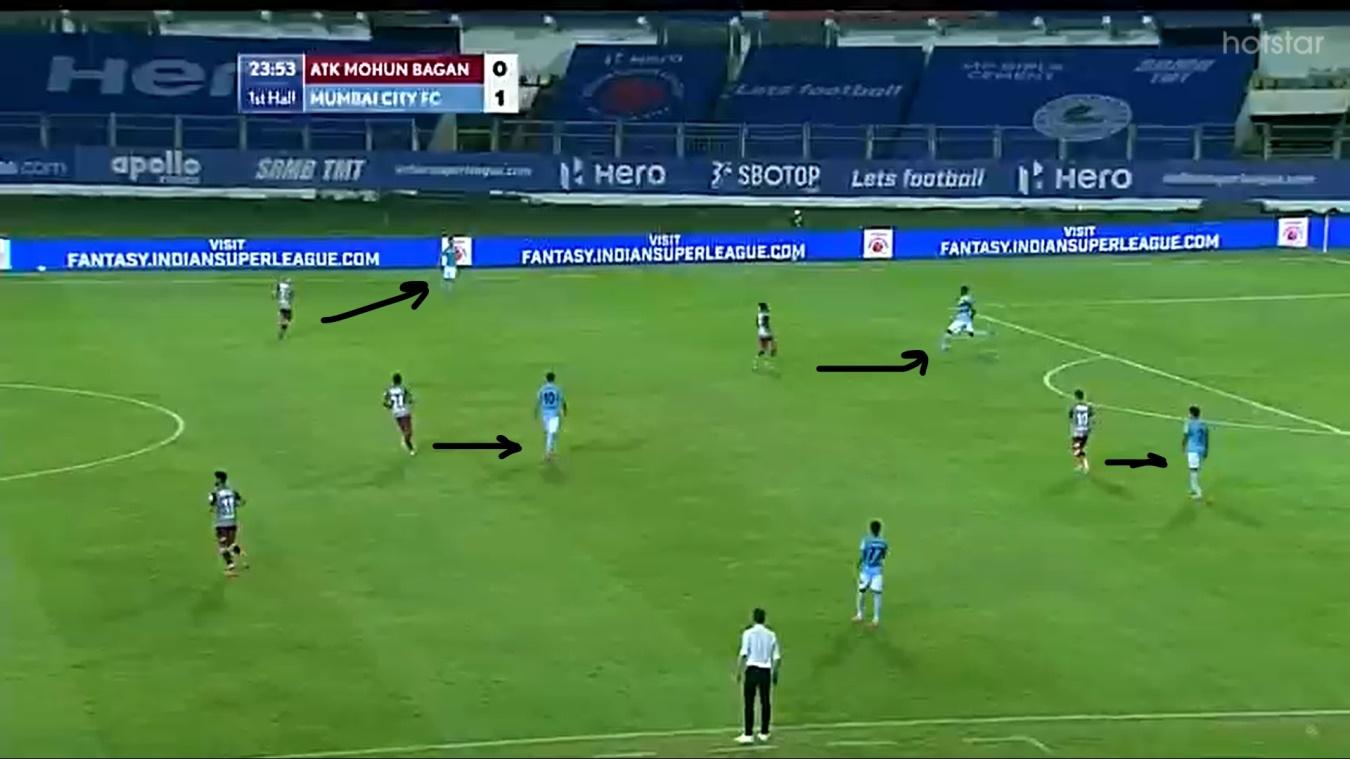 Krishna pressed the central option (either Nawaz, or Fall), meanwhile Kauko and Boumous took the wider options. Previously, Boumous was tasked with pressing Fall, but his lackadaisical efforts meant that it was too easy for Buckingham’s Blues to play the ball out.

Perhaps, by tasking Boumous with pressing Bheke, they felt that they could better neutralize Mumbai.
Lenny also came up the pitch to mark Jahouh, but often times he would be forced to go back as Jahouh became part of the back-line.

Deepak was tasked with pressing Apuia, and at times, stopping Vikram from receiving the ball deep.
The above photo was one of their better patterns, as it resulted in Mumbai having to go long

Another thing we saw in the first half was ATKMB shifting in a sort of a 4-4-2. Boumous and Krishna stayed up, one of the wing-backs took the position of a full-back and Kauko became a wide mid.

Here, Liston played as a LM, Kauko dropped in as a narrow RM and Manvir played as an RB. 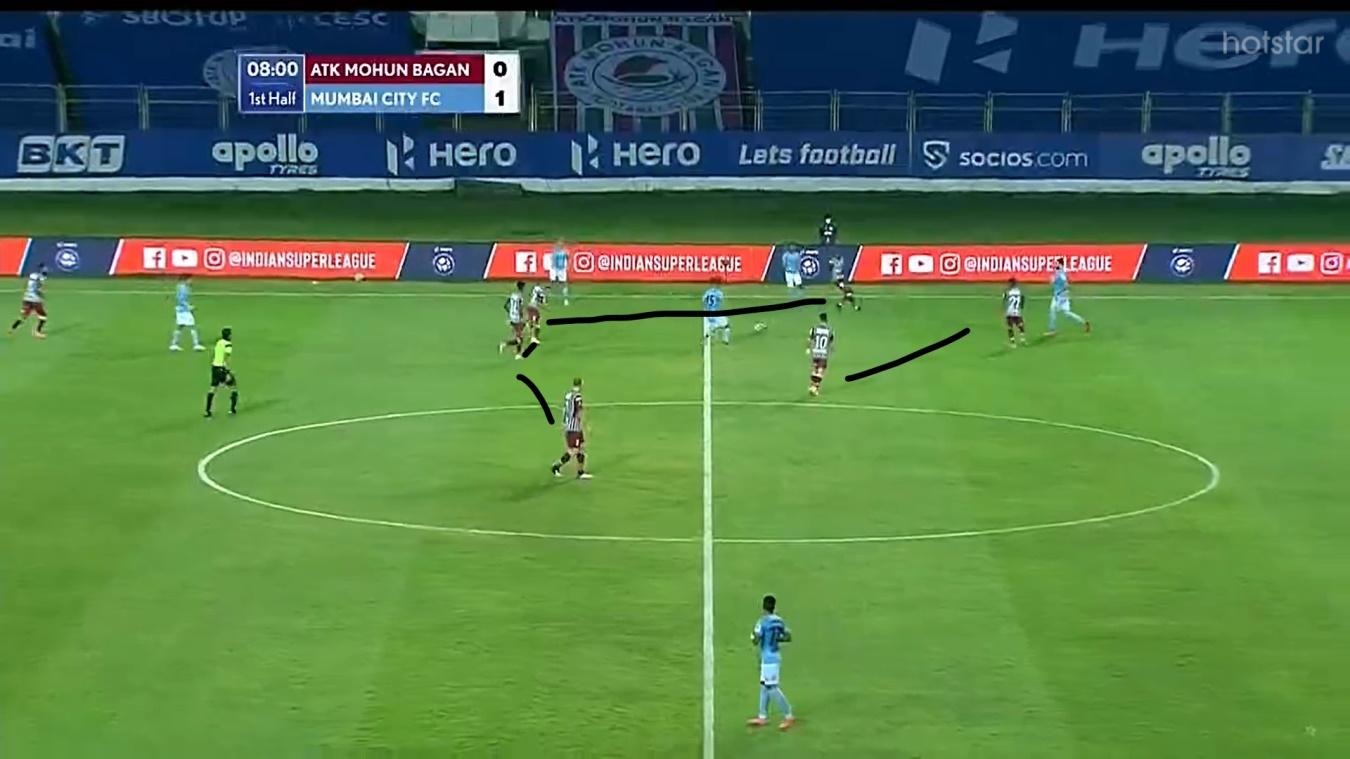 Due to the poor defending in the first half, it was understandable why Habas brought in David Williams and Prabir Das. If it wasn’t for the red card, their press would most likely have improved.

However, in either half, the press set up by the Kolkata side was far too casual and was easily bypassed. Stats show that ATKMB had a PPDA (Passes allowed per defensive action) of 21.47 as compared to Mumbai’s 9.05. This means that on average, Mumbai could make 21.47 passes before ATKMB either won the ball, fouled Mumbai or sent it out of play.

Combining this with the fact that they weren’t sitting back in a deep block goes to show that there was ample space between the lines to exploit.

With this, we can see how Des Buckingham differs from his predecessor as he is much more open to going direct when the opportunity arises. The team shows a certain steel and relentlessness in pressing which was missing last season. Even the Indian players in the team can take up a fair share of responsibilities in terms of passing and scoring.

On the other hand, Habas would have to take to the tactics board again. Can Liston and Manvir start as wing-backs against big teams? Would it be better to bring in the likes of Ashutosh Mehta to help out with defence instead? Fortunately, it is still early and the Green & Maroons still have the time to find their feet.